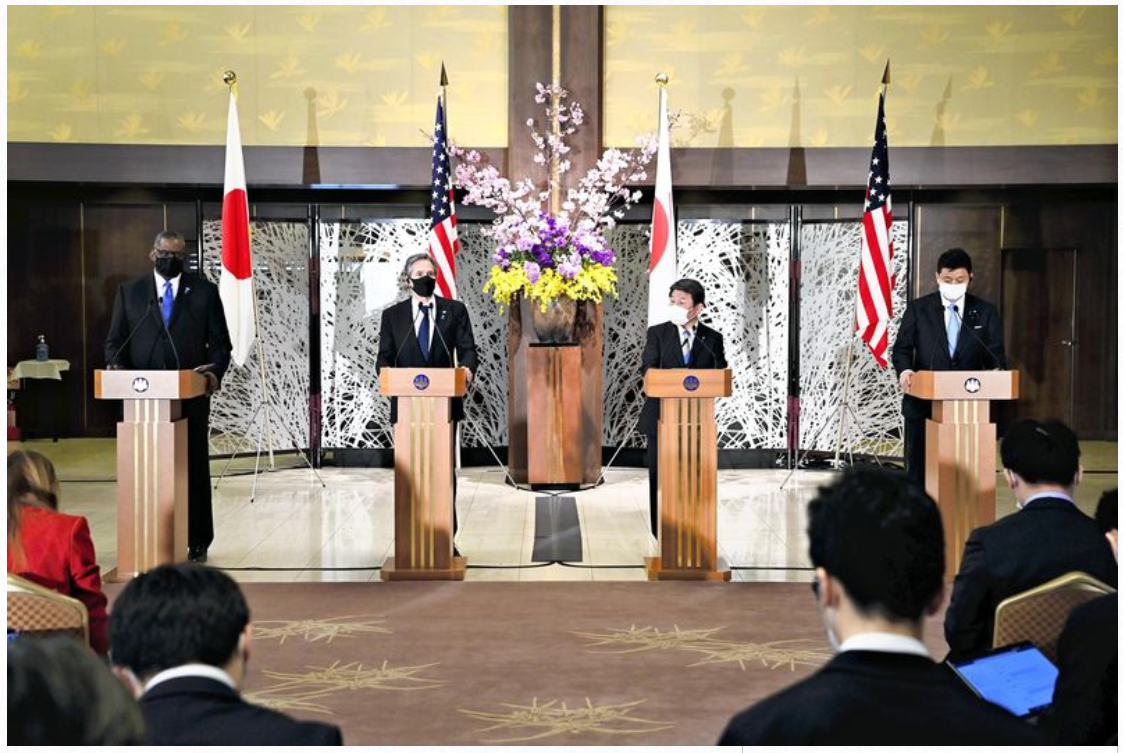 The Japanese and U.S. governments plan to release a joint statement in show of unity against China after the first in-person meeting of Prime Minister Yoshihide Suga and President Joe Biden in early April, The Yomiuri Shimbun has learned.

In light of China’s repeated encroachments on Japan’s territorial sovereignty, the two governments plan to clearly state that Article 5 of the Japan-U.S. Security Treaty, which stipulates U.S. obligations to defend Japan, applies to the Senkaku Islands in Okinawa Prefecture. The two governments are also coordinating an affirmation of cooperation on other security issues, such as the development of diversified supply chains for rare earths and pharmaceuticals, for inclusion in the statement.

According to multiple government sources, the Japan and U.S. will compile the statement based on agreements reached at the 2-plus-2 security talks attended by the nations’ foreign and defense ministers, as well as at the separate foreign ministers’ meeting, which were held in Tokyo on March 16.

In response to recent intrusions by Chinese Coast Guard ships into Japan’s territorial waters around the Senkaku Islands, the joint statement is expected to highlight the nations’ commitment to strengthening bilateral cooperation to realize a “free and open Indo-Pacific” as a counter to China’s increasingly hegemonic moves.

The joint statement is also expected to touch on the providing of extended deterrence, including nuclear deterrence, by the United States, as well as bilateral cooperation toward the complete denuclearization of North Korea and resolution of the issue of Japanese citizens abducted by North Korea.

As Taiwan has become the subject of heightened tensions, Japan and the United States are also said to be considering reaffirming the importance of peace and stability in the Taiwan Strait.

In the arena of economic security, the two countries are expected to advocate for the creation of supply chains that are more resilient, diverse, and secure, with a specific focus on rare earths, pharmaceuticals, semiconductors and high-capacity electric vehicle batteries. President Biden previously issued an executive order in February aimed at strengthening the supply chains affecting these products.

China produces 70% of the world’s rare earths, making Japan and the United States markedly dependent on China for their supply of these natural resources that are an essential ingredient in high-tech manufacturing. The two countries hope to work together to help companies remove China from their roster of suppliers, as well as encourage the development of technologies that do not require the use of rare earths.

Suga and Biden are expected to agree on the establishment of a working group at the summit to facilitate continued discussion on such supply chain issues. The names of Shigeru Kitamura, secretary general of Japan’s National Security Secretariat, and Jake Sullivan, national security adviser to the U.S. president, have been floated to lead the group.

The two countries are also exploring the inclusion of issues related to climate change, which has been a particular focus of the Biden administration, as well as cooperation on countermeasures against the novel coronavirus, including the supply of vaccines to developing countries, in their joint statement.