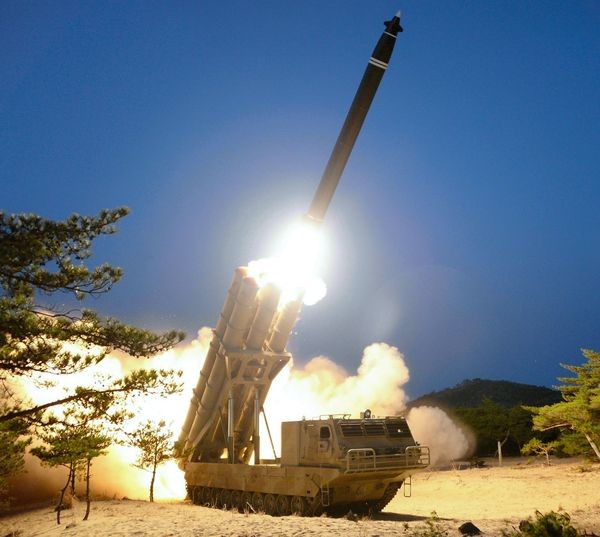 This photo distributed by the Korean Central News Agency shows a test launch of a missile by North Korea in March 2020. (Provided by Korea News Service)

North Korea appears to be returning to its old game of blackmail and brinkmanship.

The secluded nation should take a hard look at the harsh reality and change its futile pattern of thinking.

North Korea on March 25 fired two ballistic missiles into the Sea of Japan. It was the first missile firings by Pyongyang in violation of U.N. Security Council resolutions since March last year. It also marked the first such tests since U.S. President Joe Biden took office.

Former U.S. President Donald Trump, who took a diplomatic “honeymoon” with North Korean leader Kim Jong Un, has left the White House. The new U.S. administration is now working on a new strategy for dealing with the unpredictable regime in Pyongyang.

While Biden’s North Korea policy has yet to take shape, he is likely to adopt a traditional formula based on working-level talks that will stand in sharp contrast with Trump’s top-down approach. North Korea is not good at handling such negotiations with other countries because of concentration of power in the hands of its leader.

Pyongyang may have conducted the provocative acts because of this prospect. Obviously, the country is resorting to that old, shallow trick of trying to gain the upper hand in negotiations through actions designed to put pressure on the other side.

By refusing talks with the U.S. administration, North Korea does nothing to improve its hopelessly isolated situation.

Battered by the U.N. sanctions and natural disasters, the North Korean economy has been further depressed by draconian measures to prevent the spread of the new coronavirus. The country is reportedly facing a serious food shortage, forcing the authorities to exhort the people to be self-sufficient.

Prior to the ballistic missile test, North Korea also fired cruise missiles on March 21. How the country ratcheted up the level of its provocations while gauging the response from Washington seems to suggest it is not seeking serious confrontation with the United States.

If, however, it wants to extricate itself from its debilitating international isolation to rebuild its impoverished economy, Pyongyang needs to stop the folly of conducting provocative acts, at the very least.

Washington’s policy toward the Korean Peninsula fluctuated wildly under the Trump administration, weakening the traditional framework of cooperation among the United States, South Korea and Japan in dealing with the North.

It is urgent for the three countries to coordinate their respective North Korean policies from the viewpoint of the need to stand together in the face of security threats posed by Pyongyang’s arms programs.

The Biden administration should make a comprehensive review of the history of the U.S. relationship with North Korea and develop an effective policy to tackle the challenges posed by the country’s behavior.

It should map out a plan for steady, if gradual, progress toward the goal of denuclearizing the Korean Peninsula and building permanent peace in the region.

Cooperation among Tokyo, Washington and Seoul should be a foundation for any U.S. policy toward North Korea.

In recent years, various ill-prepared, ill-coordinated tactics have been used in dealing with Pyongyang, including single-minded efforts to put pressure on the regime, totally ignoring its actions and a sudden shift toward dialogue with the country. However, such haphazard responses will never work.

The South Korean administration of President Moon Jae-in, which puts the top priority on reconciliation between the two Koreas, will reach the end of its term in one year.

It seems to be exploring ways of easing the sanctions and providing support for the North on its own. But it should restrain itself from taking any solo actions not coordinated with Japan or the United States.

The relationship between Japan and South Korea is strained over such history issues as wartime “comfort women” and Korean laborers drafted to work in Japan. These remain major obstacles for improved cooperation among the three nations.

Both Tokyo and Seoul should never forget that North Korea’s short- and medium-range ballistic missiles pose a common security threat to both countries.

Senior security policy officials from the United States, South Korea and Japan will meet in Washington next week for the first such meeting in about a year.

As officials responsible for the security policies of the three major countries committed to freedom and democracy, they should have constructive and in-depth discussions for stability in the Asia-Pacific region.