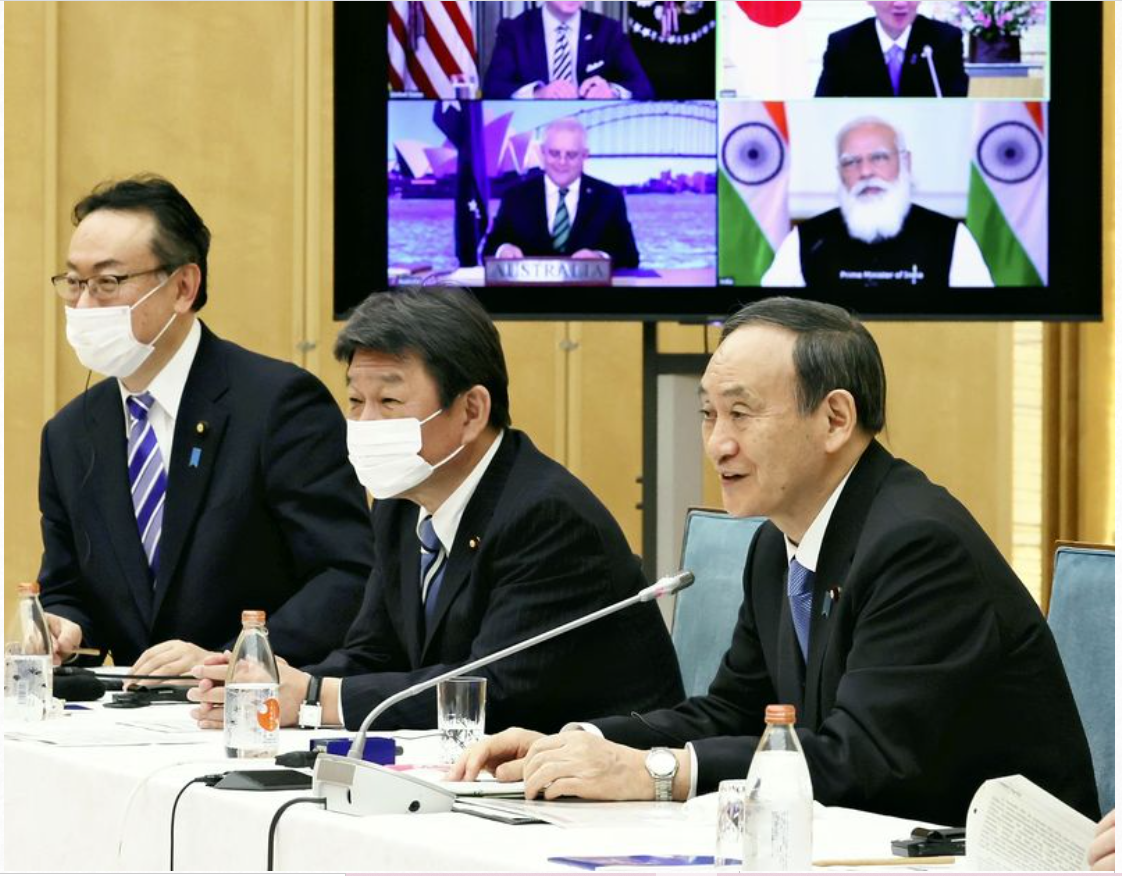 The Yomiuri Shimbun / Prime Minister Yoshihide Suga speaks in Tokyo as the leaders of the United States, Australia and India are displayed on a monitor during the virtual Quadrilateral Security Dialogue meeting on March 12.

This is the fourth installment in a series reviewing the first six months of Prime Minister Yoshihide Suga’s administration.

The approval rating of the Cabinet led by Prime Minister Yoshihide Suga continued falling early in the New Year, amid criticism of the government’s inadequate handling of the novel coronavirus. During interpellations at the Diet, Suga looked expressionless and out of sorts as he stood to reply.

“He won’t be able to hold on much longer, will he?” was one whisper.

At around this time, Suga’s predecessor as prime minister, Shinzo Abe, who came from a Liberal Democratic Party faction led by Hiroyuki Hosoda, asked the faction’s members to prop up Suga.

“Seiwa and the Aso faction should firmly support him, shouldn’t they?” Abe said, referring to Seiwaken, a policy research group that the Hosoda faction runs, and Deputy Prime Minister Taro Aso’s faction.

Abe admonished faction member Hakubun Shimomura, chairman of the LDP’s Policy Research Council, for this remark: “If the LDP loses in both elections, there is the possibility a political struggle will be triggered,” regarding by-elections in April for seats in both houses of the Diet.

Yet another former prime minister is keeping in step with Abe.

In a late-night email on Jan. 15, Suga wrote to Aso: “I have received the cough drops. They worked promptly. I am grateful to you.”

Earlier that day, habitual cough drop user Aso had some of the lozenges delivered to the Prime Minister’s Office. Aso was concerned because Suga was noticeably coughing at the time.

In February, when the lower house’s Budget Committee meetings started in earnest, Aso as the deputy sat next to Suga. At around 3 p.m. every day, Aso, who is also the finance minister, handed Suga a sheet of paper he had the Finance Ministry draw up. It was a graph showing the change in new virus infection cases in Tokyo, designed so that the change can be seen by day of the week at a glance.

“Wow, it’s declining,” Suga said at one point, radiant with joy. Aso then encouraged Suga, saying, “It will soon move out of Stage 4,” referring to the government’s most serious level regarding the infection’s spread.

Abe and Aso support Suga, not only because they backed him during the party’s presidential election, but also because of their expectation that they will be able to wield their influence through supporting the Suga administration.

“Should he lose the backing of these two, Suga, who has no faction affiliation, would be immediately driven into a difficult situation,” said an official close to Abe.

Suga, too, is fully aware of this.

He visits Abe’s office to explain how the telephone conferences with foreign leaders have gone. He also asks for Aso’s instruction whenever an occasion arises.

Abe does not entirely agree with the way Suga runs his administration. Yet, as long as Suga does not reject the line pursued during the Abe era, he is poised to support Suga.

For the Abe administration, the Hosoda and Aso factions served as strong support. Thanks also to solid backing from conservative lawmakers, Abe was on firm foundation within the party. Even when the approval rating dropped, there had never been any conspicuous calls within the party to “oust Abe.”

Suga is facing such challenges, having effectively become the first prime minister with no faction affiliation within the LDP.

The deputy chief cabinet secretary plays the important role of connecting the Prime Minister’s Office to the party and the Diet. Customarily, a promising young lawmaker of a faction to which a prime minister belongs is assigned to the task, with the faction supporting him with all its might.

Suga appointed Manabu Sakai to the post as this closest of aides. Sakai has been elected to the lower house four times and leads the Ganesha no Kai, a group of young Diet members who are not part of any faction.

Shortly after he assumed the post, however, Sakai failed to promptly notify the party of the schedule of Suga’s visits to foreign countries, bringing about a situation in which the date to convene an extraordinary Diet session was delayed by three days.

Afterward, too, he brought discredit on himself, as party officials complained that he would not inform them of “important matters at important moments.” Some have complained time and again that the pipeline between the Prime Minister’s Office and the party has been clogged.

As younger lawmakers make up most of the factionless LDP members who support Suga, a weakness has been exposed: “There are no senior lawmakers around them who can advise or support them.”

Besides these Suga supporters, there is yet another group of lawmakers who back the prime minister, namely some members of the so-called Suehiro-kai, a group of legislators who, like Suga, were elected to the lower house for the first time in the 1996 election.

Among them, the one considered to be closest to Suga is Yamaguchi, whose son once worked as a secretary in Suga’s office.

“I will leave it up to Yama-chan,” Suga is known to say, putting full confidence in Yamaguchi. They frequently talk on the phone concerning not only the election situations across the country, but also the state of affairs within the party.

Yamaguchi makes it a practice to drop by Suga’s office located on the same floor as Yamaguchi’s at the official complex for Diet members. If Suga is there, they start a conversation.

Yet Yamaguchi and those who were elected to the lower house during the same election belong to different factions.

Their support for Suga remains, strictly speaking, on a personal basis. Therefore, Suga cannot expect systematic support of the type that would be extended by a faction.

Although he achieved an overwhelming victory in the party’s presidential race, Suga’s foothold in the party is fragile.

“If things should turn out so that party members say, ‘We cannot contest the election under Suga’s leadership,’ he will instantly lose support within the party,” a veteran lawmaker said.

Suga is constantly at risk.

Suga was elected last September as president of the LDP through the election held following the resignation of Abe.

He beat out Fumio Kishida, former chairman of the party’s Policy Research Council, and Shigeru Ishiba, former secretary general of the party.

After Abe announced his intention to step down, the faction led by Toshihiro Nikai, the party’s current secretary general, decided to support Suga earlier than any other faction, even before Suga made his formal announcement to run in the race. The three other leading factions — Hosoda, Aso and Takeshita — announced their support for Suga by holding a press conference attended by the three faction leaders, as if not to be outdone by Nikai.

Suga garnered support from five of the seven factions within the party, except for the Kishida and Ishiba factions.