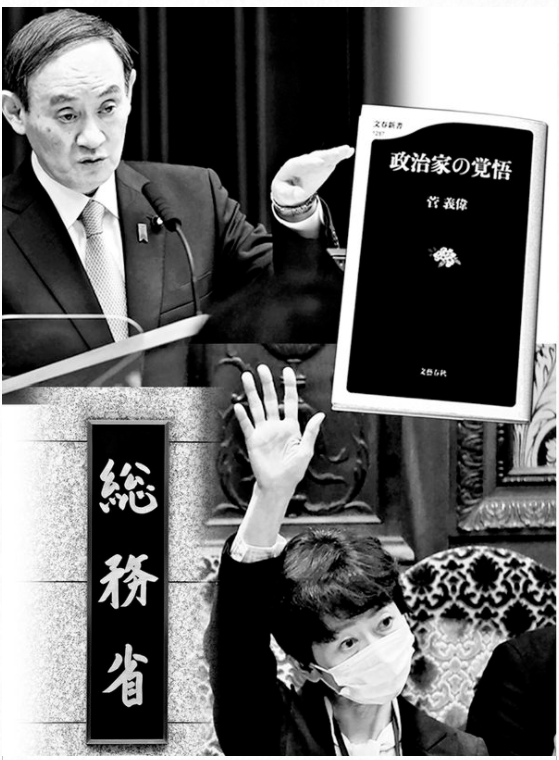 This is the fifth installment in a series reviewing the first six months of Prime Minister Yoshihide Suga’s administration.

When Suga found Secretary General Toshiro Nikai, the first thing he did was apologize, telling Nikai, “I’m sorry for having caused you trouble.”

That day, the Internal Affairs and Communications Ministry announced disciplinary action for 11 senior officials who had been wined and dined by Tohokushinsha Film Corp., which is a broadcasting-related company. Suga’s eldest son works for Tohokushinsha Film.

Suga wrote in his book “Seijika no Kakugo” (Politicians’ preparedness): “Looking back at history, there have been cases in which the political administration of the time was driven into a corner because it could not fulfill its responsibility to account for so-called scandals. There are no such scandals involving me.”

When Suga was chief cabinet secretary, he spent a lot of time explaining issues related to the Moritomo Gakuen and Kake Gakuen school foundations, and cherry blossom-watching parties, as a proxy for then Prime Minster Shinzo Abe.

This time, Suga himself has been thrown into a position in which he is being pressed to fulfill his accountability.

During a session of the House of Representatives Budget Committee on Feb. 4, Suga said with emotion: “He is about 40 years old. Normally, I hardly ever see him. We are completely different people.”

He made the remark to opposition party lawmakers who persistently criticized Suga over the wining and dining issue involving his son. But the criticism grew stronger. One person said Suga regarded the issue “like it was someone else’s problem.”

When Suga took the post of internal affairs and communications minister in September 2006, he appointed his eldest son as his secretary for political affairs. Later, the son took a job at Tohokushinsha.

Suga’s influence on the Internal Affairs and Communications Ministry has been so strong, it was dubbed as his “direct-controlled territory.”

A senior official of an economy-related ministry said: “Both the situations, in which he appointed a family member as a secretary and the son took a job at a company with interests connected with the ministry, were bad. Ultimately we have to conclude that Mr. Suga is lenient to insiders.”

When it was revealed that Makiko Yamada, then Cabinet public relations secretary who was from the communications ministry, had been wined and dined with more than ¥70,000 spent each time, ruling party members said she had no choice but to resign. However, Suga feared that other bureaucrats would have to quit one after another like dominoes, and decided to keep her in the post.

After Yamada herself resigned, citing poor health, critics said Suga’s judgment was problematic. One said Suga “should have made her resign much earlier.”

Controversy over the wining and dining spread further, and Yasuhiko Taniwaki, a vice minister for policy coordination at the communications ministry who was seen as Suga’s right-hand man, was also forced to resign to take responsibility. Taniwaki had promoted Suga’s calls for mobile phone subscription fees to be lowered.

There is no end in sight to the wining and dining scandal.

Suga used to advise then Prime Minister Shinzo Abe to quickly replace ministers and vice ministers who were found to be involved in such problems. He aimed to prevent the situation from worsening by getting rid of the politicians.

A government source said: “Prime Minister Suga doesn’t have a right hand man like himself when he was chief cabinet secretary. His crisis management responses are slow.”

Another hurdle to clear was Suga’s insufficient explanations.

On the evening of Feb. 26, Suga told reporters in the entrance hall of the Prime Minister’s Office: “My time is limited.

You’ve asked very similar questions for a while. Don’t you think so?”

Suga showed his irritation as one after another, reporters asked questions mainly about the wining and dining.

His annoyed facial expression was aired live on TV. An LDP member who served as a cabinet minister lamented, “He should have politely explained, but that scene worked against him.”

Suga’s style as a politician was like a skillful craftsman. His attitude had been that even if he did not explain things, he would get good evaluations if he achieved good results.

But immediately after he became prime minister, Suga’s style based on this belief ran into a wall. A government source said: “When he was chief cabinet secretary, it was no problem if he replied, ‘I can’t answer that.’ But a prime minister is not allowed to do that.”

A top leader of the government must make efforts to explain things to the public and obtain their understanding.

Especially now that the nation is in the midst of an unprecedented crisis due to the novel coronavirus, insufficient explanations could be fatal for the administration.

Suga has tried to change his style as a politician. After he was criticized for reading memos in his hands while looking down at press conferences, he began using a prompter to speak with his face forward. He was passive in responding to news reporters, but he now accepts requests for interviews.

On March 18, when Suga decided to fully lift the state of emergency over the novel coronavirus, he held a press conference. An aide to Suga said at the time: “He’s finally gotten the hang of it. Around November last year, I had butterflies in my stomach, but today I could listen calmly.”

Suga recently told aides: “It doesn’t work to believe that results will naturally come. I now understand that I have to properly explain.” As evidenced by this remark, Suga’s trial-and-error efforts will continue.

Suga’s way of talking with reporters was seen to be stable. He held urgent press conferences without any remarkable slip-ups, even when a press conference was held in the wake of North Korea’s test-firing of ballistic missiles.

At the same time, he often dodged reporters’ questions, saying, “I can’t answer based on what-if scenarios.” As a result, Suga was often criticized for not properly responding.

On Sept. 14 last year, Suga held his last press conference as chief cabinet secretary. On that occasion, Suga described the press conferences he held in the past, saying: “They were precious opportunities to correctly disclose the government’s positions and opinions. I prepared carefully and participated sincerely.”