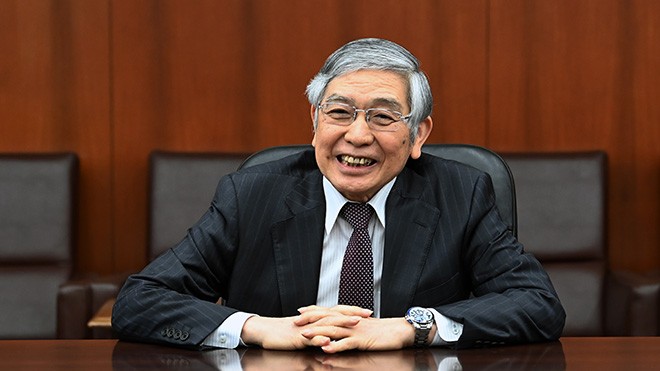 Bank of Japan Governor Haruhiko Kuroda responds in an interview with The Asahi Shimbun. (Kazuyoshi Sako)

Bank of Japan Governor Haruhiko Kuroda said the central bank will keep a close eye on how climate change could affect the stability of the financial system.

“I have a major interest in how the entire financial system deals with climate change risk,” Kuroda said on March 26 in an exclusive interview with The Asahi Shimbun.

He said the BOJ’s periodic on-site examinations of financial institutions will now also be used for studying how global warming and Japan’s push to become a carbon-neutral society could affect company management.

He said there are two major risks that climate change poses to industry.

One is the physical risk of natural disasters, such as frequent flooding, which can damage plants and factories.

The other is a transitional risk that will arise “when changing toward an economy that emits lower volumes of carbon dioxide.”

“If there is a conversion in energy sources in the future, there is the possibility of loss in value of the companies that use other energy sources, as well as investments in such companies,” Kuroda said. “That could pose a risk when making loans.”

He added financial institutions will have to consider their loan and investment policies as they thoroughly examine the risks posed by climate change based on information their corporate clients disclose.

Kuroda said the BOJ would use its on-site examinations and monitoring of financial institutions as an opportunity to examine the risk management situation at those institutions.

Central banks in other nations have also begun addressing how to deal with government policies aimed at moving toward a carbon-neutral society. Some central banks in Europe have already begun to investigate how climate change will affect the fiscal soundness of financial institutions.

The Japanese government has set a goal for the country to reach net zero emissions of greenhouse gases by 2050. Discussions within the BOJ are expected to intensify over how it should deal with maintaining stability of the financial system as the country progresses toward that goal.