Both must free themselves from the coronavirus pandemic and recover economically to bring peace and stability to the region, Marsudi said.

They also signed an agreement to let Japan transfer defense equipment and technology to Indonesia. Possible exports include technology for escort vessels.

“We will accelerate discussions toward making these transfers a reality,” Kishi told reporters after the meeting. 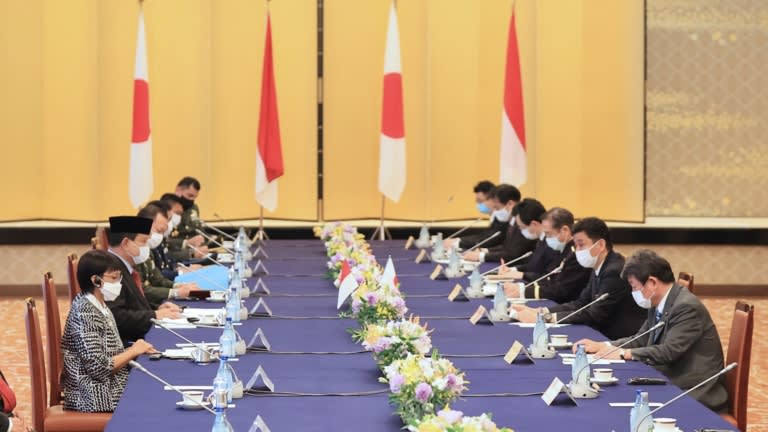 Foreign and defense ministers from Japan and Indonesia met Tuesday in Tokyo for their first “two-plus-two” meeting since 2015.

Indonesia accounts for roughly 40% of Southeast Asia’s population and gross domestic product, making it one of the most influential members of the Association of Southeast Asian Nations. It is one of seven countries, and the only ASEAN member, with which Japan maintains “two-plus-two” dialogues — a key framework for discussing comprehensive security cooperation.

The pandemic threw into sharp relief the risks of the world’s dependence on Chinese manufacturing for everything from masks to semiconductors. Japan has since worked with the U.S. to diversify supply chains and sees Indonesia as an alternative manufacturing hub.

The Ministry of Economy, Trade and Industry here and the state-backed Japan External Trade Organization subsidize companies looking to boost output in Indonesia and elsewhere in ASEAN. Ten companies, including in auto parts manufacturing, have been selected for the grants since 2020.

Indonesia is eager to attract greater investments from Japan. In 2020, its real gross domestic product shrank for the first time since 1998, during the era of the Asian currency crisis. Indonesia hopes that investments by Japanese companies will create new jobs and help its economy recover from the pandemic.

Indonesian requirements for foreign investors have been notoriously complex. To streamline the process and spur more investment, the country in November passed an omnibus law in a campaign spearheaded by President Joko Widodo.

At a separate meeting with Kishi on Sunday, the Indonesian defense minister discussed the new law and urged Japanese companies to invest in Indonesia. Indonesian Industry Minister Agus Gumiwang Kartasasmita visited Japan earlier this month to meet with government officials and business leaders.

Tuesday’s meeting also covered Japan’s proposal on joint development of the Sulu Sea and Celebes Sea lying between Indonesia and the Philippines. Planned initiatives include building infrastructure and providing surveillance know-how to combat piracy and terrorism.

The two sides expressed their shared concern over unilateral attempts to alter the maritime status quo, in response to Chinese expansionism in the East and South China seas. Kishi warned that Beijing could accelerate such efforts under its new coast guard law, which upgraded the body to quasi-military status.

The South China Sea is a key sea lane connecting East Asia and the Middle East, and the growing Chinese presence there could have direct implications for Japanese national security. Tokyo sees Indonesian cooperation as key to maintaining the maritime order in the waters and in the greater Indo-Pacific region, as it is home to the ASEAN Secretariat and the only Southeast Asian member of the Group of 20.

Meanwhile, Indonesia has been concerned by incursions into the exclusive economic zone of its Natuna Islands by Chinese coast guard ships in recent years.

Still, the Southeast Asian country relies heavily on China for infrastructure investment and for coronavirus vaccines. There are concerns that this could force Indonesia into making concessions on security issues, including on its competing maritime claims with Beijing.