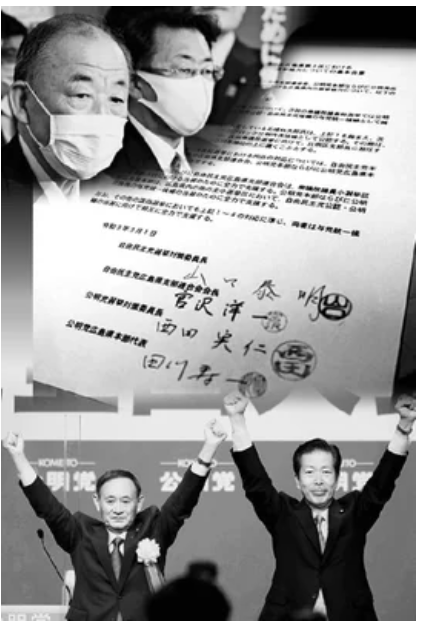 This is the sixth installment in a series reviewing the first six months of Prime Minister Yoshihide Suga’s administration.

Taimei Yamaguchi, chair of the Liberal Democratic Party’s Election Strategy Committee, and his Komeito counterpart Makoto Nishida were not smiling when they met with the media at LDP headquarters on March 1.

“We could have pressed harder in some places, but we went about things courteously and here we are,” Yamaguchi said, choosing his words carefully.

Nishida added, as if trying to convince even himself, “While there are a lot of emotions and other things, it became an opportunity to build stronger trust.”

Earlier that day, the pair had signed an agreement that made Komeito vice leader Tetsuo Saito the ruling bloc’s joint candidate for Hiroshima Constituency No. 3.

Yet, the local leaders of both parties were no-shows. Their unscheduled absence spoke to the discontent over Saito’s candidacy smoldering within the LDP Hiroshima Prefecture Federation.

In the last House of Representatives election in 2017, former Justice Minister Katsuyuki Kawai won the seat for the LDP in the constituency. However, he left the party after being arrested along with his wife, Anri, over a vote-buying scandal in the 2019 House of Councillors election for the Hiroshima prefectural constituency.

Komeito decided that it would field Saito for Hiroshima Constituency No. 3 in the next lower house election, after the party’s local supporters said they did not want to back an LDP candidate. In response, the LDP’s Hiroshima Prefecture Federation asked its party headquarters to endorse a prefectural assembly member selected from among applicants as a prospective candidate. Talks between LDP and Komeito ran aground, and the matter was finally decided at the headquarters level.

That night, Saito put in a call to Prime Minister Yoshihide Suga’s mobile phone. Suga promptly called him back.

“I will do my best to gain the understanding of the LDP prefectural federation,” Saito was quoted as telling Suga.

Suga reportedly replied: “Do your best. I support you.”

During his time as chief cabinet secretary, Suga was in almost daily contact with Saito, who was then Komeito secretary general. “Mr. Suga was truly considerate of Komeito,” Saito recalled.

During the administration of former Prime Minister Shinzo Abe, Suga was the one who coordinated with Komeito.

Suga also has ties with Hiroshi Sato, who as vice chairman of Soka Gakkai, Komeito’s power base, had a say in election matters. This strong relationship was called the “SS line” (Suga-Sato line).

When the consumption tax rate was raised to 10% in October 2019, a reduced tax rate on some items advocated by Komeito was also introduced. Abe and Deputy Prime Minister and Finance Minister Taro Aso were initially hesitant about the idea, but Suga put his support behind it.

When Aso advised Abe to dissolve the House of Representatives for an early election, Suga, with Komeito’s desires in mind, strongly opposed the move.

“Suga is always siding with Komeito,” Aso is reported to have complained at times during the Abe era.

However, when Suga became prime minister, the awkward aspects of the LDP and Komeito relationship began to stand out. According to an LDP staffer, the lack of a liaison figure to fill the shoes of “Chief Cabinet Secretary Suga” was the obvious reason for the strain.

Talks over what to do about Hiroshima Constituency No. 3 went poorly, and Suga never made his desires clear on the matter.

The number of top-level meetings has increased dramatically since the Abe era.

“We are looking to extend [the state of emergency] for about two weeks. We’re about to send out a press release,” Suga was quoted as telling Komeito leader Natsuo Yamaguchi over the phone on the evening of March 3, right after deciding to re-extend the state of emergency in Tokyo and three neighboring prefectures.

Yamaguchi, who gets a lot of calls, had missed Suga’s calls several times. Nowadays, he always keeps his cell phone with him, even putting it close by when he goes to bed. This contrasts with his relationship with Abe, which was described as “lacking chemistry.”

At the end of last year, Suga and Komeito disagreed over how much people aged 75 or older should have to pay for medical care.

When things stagnated at the policy research chair and secretary general level, the final decision had to be made in a meeting between Suga and Yamaguchi.

Their reaching of an agreement at the top is the flip side of the dysfunction at the working level.

“I feel bad for putting a burden [on the prime minister] by having him make the final agreement with me,” Yamaguchi let slip afterward.

Komeito is undergoing a generational change. Former leader Akihiro Ota and former secretary general Yoshihisa Inoue are not expected to run in the next lower house election. In February, Suga’s ally Sato reached the retirement age of 60 and is no longer handling political matters for Soka Gakkai.

“The pipeline between the LDP and Komeito is getting thinner and thinner,” a senior LDP official said with concern.

It has been pointed out that Soka Gakkai’s aging membership has reduced its ability to corral votes. The pandemic has also limited its activities, intensifying anxiety within Komeito. As the next lower house election approaches, if Komeito tries to distinguish itself to make its presence known, it could create friction with the LDP.

Some Komeito members have come to bank on Suga’s “clear understanding of Komeito” as an opportunity to push their agenda through, to a certain degree. Meanwhile, some LDP members have been unhappy with what they see as Suga’s generosity toward the coalition partner.

More than 20 years since they teamed up, it remains to be seen if the parties can create new pipelines.