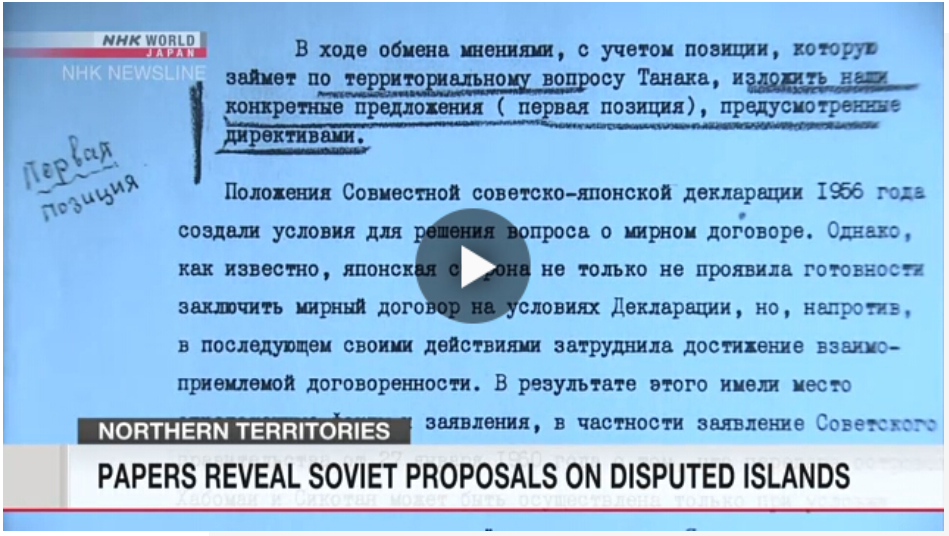 NHK has learned that declassified diplomatic documents show the then Soviet Union considered making a range of proposals to Japan regarding four Soviet-controlled islands that Japan claims.

The Soviet Union drew up the documents in the run-up to a 1973 summit in Moscow between Soviet leader Leonid Brezhnev and Japanese Prime Minister Tanaka Kakuei.

The documents say the Soviet Union could agree to implement provisions of the 1956 bilateral joint declaration and have a future treaty stipulate the handover of Habomai and Shikotan islands. Both are part of the four islands. The Soviet Union planned the handover as its first position.

The documents also show the Soviet Union studied other proposals in case Japan would not accept the handover.

They included allowing Japanese fishing boats to visit the other two disputed islands, Kunashiri and Etorofu, and giving fishing rights in some waters around them to Japanese ships in return for fees.

The documents show the Soviet side considered suggesting the proposals in addition to granting the handover.

In case an agreement would not be reached with those proposals, the Soviet Union worked on another idea — that both sides should consider signing a treaty of good neighborliness and cooperation that would not mention issues of territorial demarcation.

Details of these proposals were not presented to the Japanese side at the summit.

Moscow State Institute of International Relations Professor Dmitry Streltsov, an expert on Russia’s policy toward Japan, pointed out there may be a lack of final coordination within the Soviet Union. He says military and other Soviet officials opposed offering concessions to Japan.

Kanagawa University professor Shimotomai Nobuo, who is well-versed in Japan-Russia relations, says the documents show the Soviet Union considered making proposals to Japan in addition to the two-island handover at the time.