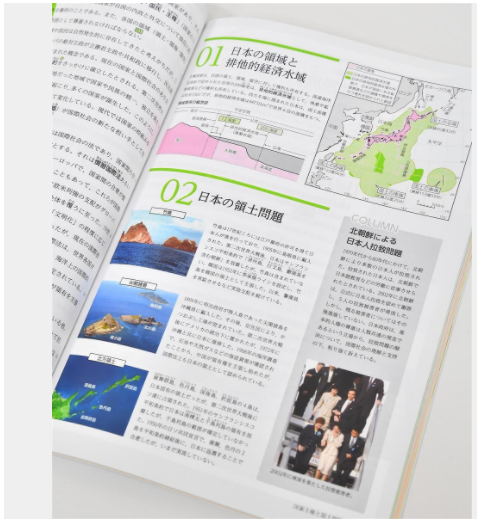 A textbook for the new subject of “kokyo” [public affairs], which covers territorial and abduction issues.

The education ministry has released the results of the screening of high school textbooks to be used from next spring. This was the first screening of textbooks to comply with the new curriculum guidelines. Many of the textbooks subject to the screening were for the new subjects of rekishi sogo [comprehensive history], which combines modern and contemporary Japanese and world history; kokyo [public affairs], which teaches citizenship; and joho I [information I], in which students will learn programming skills and information and telecommunications networks, among other topics.

The Sankei Shimbun pointed out that a masochistic view of history was reinforced because many textbooks took up the comfort women issue in the subject of rekishi sogo. No textbook made explicit mistakes by saying that the Japanese Imperial Army and the authorities forcibly recruited [Korean women]. But descriptions such as “military comfort women” and “forced to join the army as comfort women,” which remind people of coerciveness, passed the screening. Sankei insisted: “It is questionable whether teachers can teach students history from a broad perspective by using textbooks that are unable to eliminate a masochistic view of history. This is a matter of concern.” It added, “With respect to the release of information to the international community as well, this needs to be corrected promptly to prevent improper descriptions from being left in textbooks.”

The term “military comfort women” was coined after World War II and used in the 1993 statement issued by then-Chief Cabinet Secretary Yohei Kono acknowledging the forcible nature of the recruitment of comfort women. The term appeared all at once in junior high school textbooks used from fiscal 1997. But this led to criticism and the term “military comfort women” was removed from the textbooks. But the term reappears in junior high school textbooks being used from this spring. Sankei emphasized: “What hinders the correction of the term is the “neighboring-country clause” for textbook screening that shows consideration for China and South Korea. This clause remains in effect and restricts screening. Along with the Kono statement, the clause should be reviewed.”

As for territorial issues, all textbooks clearly stated that the Northern Territories, Takeshima, and the Senkaku Islands are an “inherent part of the territory” of Japan according to the new curriculum guidelines. Also, the textbooks of the new compulsory subject of chiri sogo [comprehensive geography] and kokyo fully describe the territory issue. These are welcome developments. Sankei argued that teachers also need to fully understand the historical background of the territory issue. The Yomiuri Shimbun also said, “There are also many textbooks that clearly describe the Northern Territories, the Takeshima islands and the Senkaku Islands as ‘inherent parts of the territory of Japan.’”

Meanwhile, the Asahi Shimbun raised doubt about territorial issues, saying: “In the screening, objections were made to original passages that said Russia ‘effectively controls’ or ‘virtually administers’ Japan’s Northern Territories. The screening authorities said the passages could ‘mislead’ students, and they were rephrased to the effect that the islands are under Russia’s ‘illegal occupation.’ But nowhere did the edited versions explain Russia’s counterargument.” This sounds as if the paper is taking Russia’s side. But it basically seems to have seen “those responsible for textbook who have only one purpose of ensuring the textbooks contain the government’s view in mind” as problematic.

The Mainichi Shimbun wrote: In this screening, textbooks on kokyo and rekishi sogo, which combines modern Japanese and world history, received during screening many comments on passages related to Japan’s territorial issues. The texts were revised so that they align with the Japanese government’s views. If inquiry-based learning is to be emphasized, the process of being exposed to diverse opinions, discussion of issues, and understanding the nature of the issues will be important.

The Nikkei also argued: “The description that ‘Japan effectively controls’ the Senkakus was questioned during the screening and a sentence ‘no territorial issue exists’ was added. We have no objection to studying the government’s views in textbooks, including the history issues with Japan’s neighboring countries. But it is also important to learn about the background of the issue rather than just saying that ‘no issue exists.’”

Asahi also pointed out: “On matters related to postwar compensation, an original passage that said ‘many problems remain unresolved,'” referring to the treatment of those from Japan’s former colonies and the issue of so-called comfort women, was judged as inappropriate. The part in question was rewritten to the effect that “the government considers the problems already resolved, but there are many problems.” We hope that teachers will have the sensitivity to carefully guide their students about the “many problems.” This could distort historical facts and allow the term “comfort women,” which demeans Japan, to take on a life of its own.

In addition to the introduction of joho I, the existing kokugo sogo [comprehensive Japanese] will be divided into gendai no kokugo [contemporary Japanese] and gengo bunka [language culture], bringing about significant changes to high school subjects and the lineup of subjects from next spring. It is hoped that the government will make preparations to enable teachers and students to smoothly respond to the change and fully take advantage of the new textbooks.