TOKYO/BERLIN — China loomed large as Japan and Germany discussed stepping up security cooperation in the Indo-Pacific, possibly including joint exercises this summer, at their first “two-plus-two” meeting of foreign and defense ministers Tuesday.

Japanese Foreign Minister Toshimitsu Motegi warned of increasing Chinese military activity in the Indo-Pacific. “Owing to unilateral efforts to change the status quo by force, we can no longer rely on the assumptions that have supported peace and stability in the international community,” he said.

European countries including Germany have been distancing themselves from China as it tightens its grip in Hong Kong and Xinjiang. Japan and the U.S. are eager to enlist their cooperation toward a “free and open Indo-Pacific” to counter Beijing’s expanding military and economic footprint in the region.

“So that Germany and Europe can continue to help actively shape the world of tomorrow, we must strengthen our engagement in Asia in particular, where important global decisions for the future will be made during this century,” German Foreign Minister Heiko Maas said.

“Cooperation with Japan plays an important role in this regard, because Japan is a key partner of Germany in efforts, based on shared values, to promote multilateralism, the rule of law and human rights,” he said.

The two sides discussed conducting joint naval exercises when Germany sends a navy frigate to the Indo-Pacific as early as summer. The frigate is expected to make port in Japan as part of the tour. 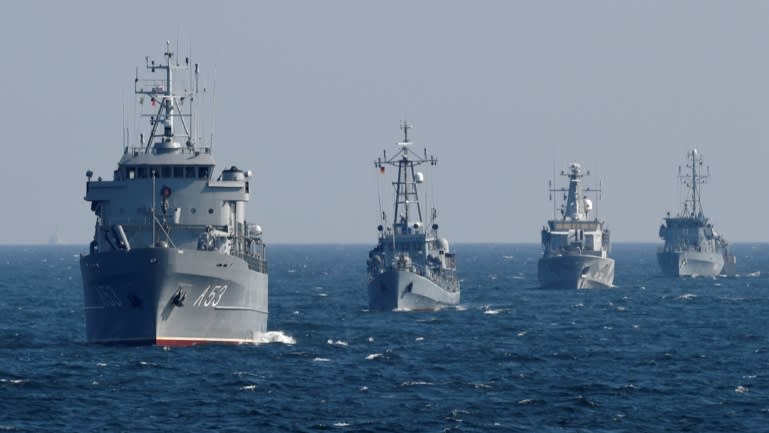 German Navy frigates in the Baltic Sea: A German frigate is expected to make port in Japan as part of an upcoming Indo-Pacific tour.   © Reuters

The move is highly unusual for Germany, which has no territory in the Asia-Pacific. Though Germany has sent naval vessels to the region before to promote goodwill, it has never done so for overtly security-related reasons, according to Japan’s Ministry of Defense.

At Tuesday’s virtual meeting, both sides shared serious concerns over the Chinese crackdown in Hong Kong, as well as human rights abuses against the Uyghur minority in the Xinjiang region.

The two-plus-two dialogue is the latest signal from Germany of its growing interest in the Indo-Pacific. In the U.S., the Biden administration is eager for greater European involvement to promote a rules-based order in the region amid concerns that Washington by itself cannot check the Chinese military presence in the region.

Germany is the third European country to set up a two-plus-two framework with Japan, after the U.K. and France.

Japan and the U.K. expressed shared concerns over the situation in Hong Kong at their last two-plus-two talks this February. The U.K. will send the HMS Queen Elizabeth aircraft carrier to the Indo-Pacific by year-end for joint drills with Japan’s Maritime Self-Defense Force.

Japan and France have not held a two-plus-two meeting since 2019. There is a growing push to revive the dialogue within the Japanese government, especially after France said in February that it had sent a nuclear attack submarine to the South China Sea.

The U.K. has been placing a greater focus on Chinese human rights issues under Conservative Party Prime Minister Boris Johnson, departing from the warm bilateral ties under predecessor David Cameron. It is especially critical of China detaining pro-democracy activists in former British colony Hong Kong despite previously agreeing to grant the city a high level of autonomy after its handover.

Chinese economic clout in Asia is a concern as well, particularly as Britain turns to the market following its exit from the European Union. China “presents the biggest state-based threat to the U.K.’s economic security,” the British government. said in a defense review published in March.

The U.K. has applied to join the Comprehensive and Progressive Agreement for Trans-Pacific Partnership, the trade pact known as the TPP-11, which increasingly serves as a balancing force against China in trade.

Germany and France have criticized China over not only Hong Kong, but also the Uyghurs and its own early downplaying of the coronavirus.

“The U.K., Germany and France believe they need to work with Japan and other countries with which they share common values in order to send a political message,” said University of Tokyo professor Yuichi Morii, an expert in German politics.

But European countries do not want to lose access to China’s 1.4 billion consumers. Volkswagen sells roughly 40% of its new vehicles in China. Their geographic distance from the country means Beijing does not pose as much of a direct security threat as it does to Japan, for example.

Merkel stressed the importance of dialogue to Chinese President Xi Jinping in their April 7 phone call. Japan and the U.S. will likely need to bolster diplomatic efforts to keep Europe on board should tensions with Beijing start to weigh on its economy.

Additional reporting by Yusuke Nakajima in London and Togo Shiraishi in Paris.