Japan teams up with U.S., Australia to build submarine cables 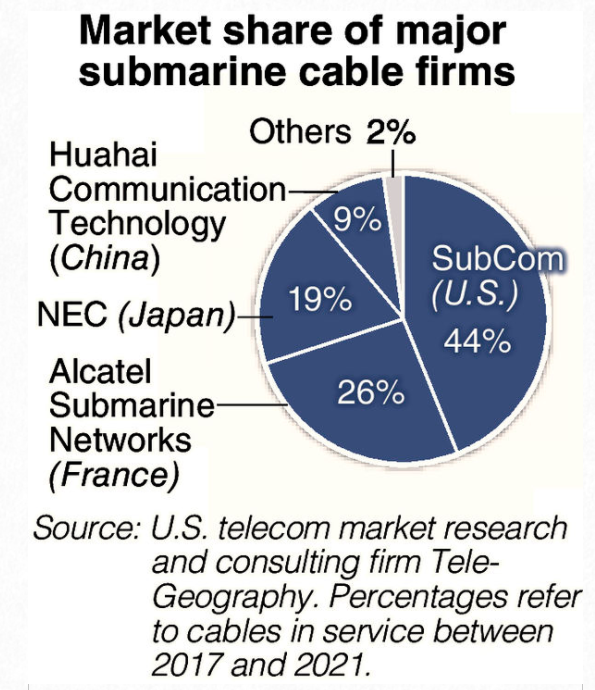 Japan, the United States and Australia will work together to set up submarine communications cables in the Pacific region, The Yomiuri Shimbun has learned, in a bid to counter China’s rapid expansion in field of undersea cables.

Government-affiliated financial institutions in each country will provide financial support for new contracts for marine cable projects. The three countries will deepen their cooperative relationship to secure this infrastructure, which is vital for security, and counter the risk of data exfiltration and disconnection.

Submarine cables are thin optical fibers covered with resin and laid in the deep sea around the world. They are said to account for 99% of the world’s international communications, and the demand for cable installation is growing in parallel with the increase in global transmissions.

According to NEC Corp., the latest cable system can transmit data equivalent to about 10,000 DVDs per second.

This trilateral cooperation is being spurred by China, which is rapidly rising in the field of submarine cables.

Companies in Japan, the United States and Europe hold a combined share of about 90% of the world’s submarine cables, and China’s Huahai Communication Technology Co. — which used to be a subsidiary of Huawei Technologies Co. — now has the fourth-largest global share.

China has been actively laying undersea cables in various places under its Belt and Road Initiative to create a huge economic bloc. In particular, China is seeking to expand its influence over the Pacific island nations, some of which have friendly relations with Taiwan, by providing economic cooperation and assistance. Some Chinese companies are pursuing orders for undersea cables from those islands.

The Chinese companies are believed to use low costs as leverage to win contracts, apparently with the government’s financial backing, according to some observers. Japan, the United States and Australia will support the establishment of reliable telecom networks with the support of government-affiliated financial institutions in each country.

In January, NEC won a contract to build a submarine cable connecting Palau, one of the Pacific island nations, with the United States and other countries. The project will be financed by the Japan Bank for International Cooperation as well as government agencies in the United States and Australia.

The three countries plan to increase the number of such projects by strengthening their cooperation.