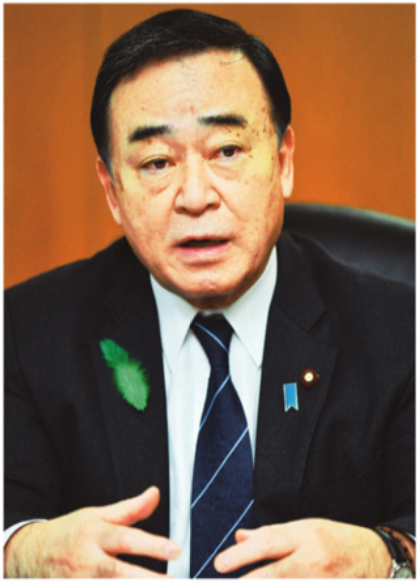 Minister of Economy, Trade and Industry Hiroshi Kajiyama speaks during an interview with the Sankei Shimbun in Tokyo’s Chiyoda Ward on April 16. (Photo by Ikue Mio)

Minister of Economy, Trade and Industry Hiroshi Kajiyama sat down for an interview with the Sankei Shimbun on April 16. He said the government needs to set an ambitious nationally determined contribution (NDC) for reducing greenhouse gas emissions for 2030 by working out the details with the industrial sector. The following are excerpts from the interview.

Question: How will the government cooperate with the new U.S. administration under President Joe Biden in the fight against climate change?

Hiroshi Kajiyama: I think we can share roles and cooperate in various areas, including innovation, Japan-U.S. joint assistance to third countries, and the utilization of a two-trillion-yen fund to support Japanese companies working on the development and dissemination of innovative technologies toward the goal of achieving a carbon neutral society in 2050 for ten years.

Q: A summit on climate change hosted by President Biden will be held next week.

Kajiyama: Our NDC needs to be consistent with (Japan’s goal of) net-zero emissions in 2050. Japan needs to set an ambitious numerical value. The economy ministry will set the NDC not by subtracting (from a major goal) but by adding to it. We are currently accumulating numerical values based on things that are just barely feasible.

Enthusiasm or ambition alone is not enough to reduce [greenhouse gas emissions], so we need to create a system for implementation. All these efforts require coordination with industrial circles and we are (now) in the process of coordination. It’s like asking whether we can tell a boxer who has already lost as much (weight) as he can to sweat off another 100 grams. (In addition to the industrial sector,) all of the government agencies related to energy saving and the entire government must make efforts.

Q: What matters when setting an NDC?

Kajiyama: It all comes down to discussions with industry. We must think about how to shift to new energy sources while maintaining industrial competitiveness. Thinking is easy but we also need to consider the employment issue. In order to keep manufacturers operating in Japan, we need to consider the NDC and the energy mix in the right order.

Q: There have been in-depth discussions on drawing up a new basic energy plan. What do you think about the

Kajiyama: We are discussing the energy mix without any taboos. Only renewable and nuclear energy can achieve decarbonization, and we must consider how much [of the energy mix] these types of energy can cover. There is room for growth in offshore wind and solar power generation as renewable energy sources. But in reality, the issues of whether these energy sources can be fully utilized by 2030 and how they can can be increased are still unresolved.

We will use existing nuclear power plants and restart them after gaining the approval of local communities. We have not yet restored the public’s trust [in nuclear power] since the accident (at the Fukushima Daiichi nuclear power plant). We are also not considering newly constructing or replacing (rebuilding) nuclear plants at this point. But we will continue to do research and development on technology. We may be able to create inexpensive construction materials for nuclear plants, such as fuel rods and pipes, as well as compact and integrated [reactors]. These will ensure the safety and economical efficiency [of nuclear plants] in the future. We are discussing (nuclear power generation) at a panel in the ministry and want to formulate a tentative course of action soon.