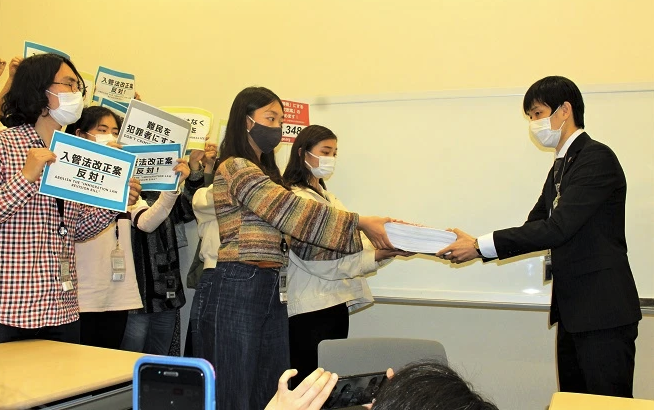 A group of students submit a petition with more than 40,000 signatures opposing the bill to amend the Immigration Control and Refugee Recognition Law to an immigration bureau official on April 14 at the Upper House Diet Members’ building in Tokyo’s Chiyoda Ward. (Ryuichi Kitano)

A government-drafted bill to revise the Immigration Control and Refugee-Recognition Law fails to address key issues, virtually assuring that Japan will face more international criticism over its regulations concerning detention and deportation of illegal immigrants. The bill needs to be fundamentally reworked.

The Lower House is considering the proposed changes in light of growing cases of foreign nationals spending long periods in detention centers for overstaying their visas before being deported.

The government contends the legislation will resolve this problem. The underlying issue is that the bill raises many questions concerning the principle that people who need protection should receive appropriate assistance.

With regard to a provision that protects asylum seekers from deportation, for instance, the bill would introduce an exception that allows only two applications for refugee status on the same grounds.

The revision would also usher in a program to allow asylum seekers to remain in Japan under the supervision of relatives or supporters instead of being detained. Immigration control authorities, not courts, would have total discretion on whether to apply this program to specific cases. Another drawback is the lack of any limit on the duration of detention.

During a Lower House plenary session, Justice Minister Yoko Kamikawa brushed aside those concerns, saying any detainee could file an administrative lawsuit to seek release from detention. Resorting to litigation under such circumstances would place a huge burden on asylum seekers.

It is crucial to get the judiciary involved in decisions on detention to ensure fairness and transparency.

Also, the new supervision program looks like a nonstarter as asylum seekers would be barred from working. If they violate this rule, their “supervisors,” meaning their relatives or supporters, would be required to contact the authorities.

Human rights groups and lawyers working on behalf of foreign nationals said they cannot serve as supervisors under the program because doing so would be against the interests of the people they are trying to protect.

The program cannot work if nobody is prepare to take on the role.

To be fair, the bill includes some notable improvements. It would, for instance, establish a procedure to accept people who require protections similar to those provided to refugees, even if they do not formally qualify as refugees.

With regard to a provision that empowers the justice minister to grant special permission to stay in Japan, the bill would establish a formal procedure to apply for such status, replacing the current opaque system based on the minister’s discretion. The bill specifies factors that should be considered in deciding whether to grant permission when applications are made.

But Kamikawa refused to respond to opposition lawmakers’ calls for further efforts to revamp the bill to address problems with the immigration control process and practice, effectively asserting there will be no flaws in the way immigration control authorities administer the system. Such an obdurate attitude only hampers constructive and in-depth debate on the issues being raised.

Opposition parties have submitted an alternative bill that would make the judiciary responsible for specific decisions concerning detention and impose an upper limit on the duration of incarceration. It would also make the Justice Ministry’s division in charge of refugee recognition separate and independent from the immigration control authority.

Critics have long pointed out problems caused by the administrative structure under which the division in charge of dealing with illegal immigrants and the division to protect and support potential refugees are both part of the same ministry.

The Diet should work to establish a system that measures up to international standards by delving into issues related to the organization as well.