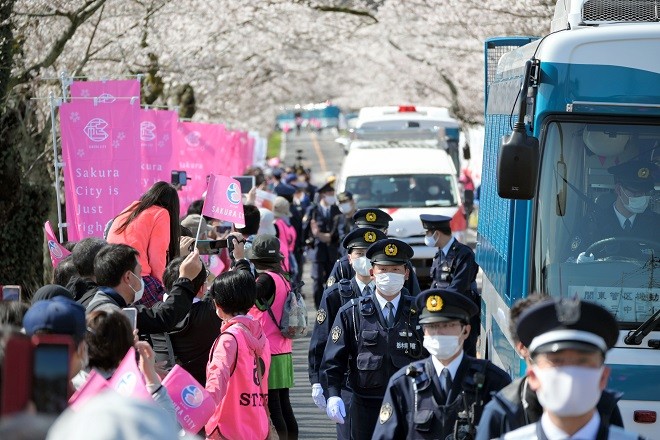 Police officers stand in front of spectators at the Olympic torch relay to ensure they keep their distance from the torchbearers in Sakura, Tochigi Prefecture, on March 29. (Asahi Shimbun file photo)

The expression “Concorde fallacy” was coined in reference to the eponymous British-French supersonic passenger airliner that debuted in the 1970s as the epitome of luxury air travel.

In the course of its development, the governments of both Britain and France realized the airline’s economic viability was extremely dubious. But having already invested heavily in the project, they refused to give up.

The Concorde ended up a commercial disaster, according to “Ho to Shakaikagaku wo Tsunagu” (Linking law and social sciences) by Takashi Iida.

The lesson from this failed supersonic transport project, Iida pointed out, is that it is better to cut one’s losses and move on, rather than continue to obsess over the sunk costs.

We can apply this to the Tokyo Olympics. It is a fact that ever since Tokyo won the bid, massive investments have been made on the construction of facilities and other endeavors.

Also, athletes have staked their careers on training for the Games, and I can fully understand how difficult it must be for the organizers to let them down by canceling this quadrennial sporting extravaganza.

But now is the time to assess the situation with cold objectivity.

Osaka Governor Hirofumi Yoshimura announced on April 19 that he will ask the central government to declare a third state of emergency for his prefecture. His hope is to fight the spread of new coronavirus variants by calling on department stores, restaurants and movie theaters to temporarily suspend operations to stop the movement of people.

Experts point out that Osaka’s situation today will be Tokyo’s tomorrow.

With mass vaccinations in the works while the number of infected people keeps growing, front-line health care workers are under tremendous strain.

But the government is planning to divert some of the already overstretched health care resources to tend to Olympic athletes in what it calls a “three-front campaign.”

Should the Olympics trigger a surge of infections, the loss of lives and the financial damage incurred by society would be incalculable.

Is it not time now to seriously consider canceling the Tokyo Olympics?

I certainly would not like the expression “The Tokyo Olympics fallacy” to be coined in the days to come.

Vox Populi, Vox Dei is a popular daily column that takes up a wide range of topics, including culture, arts and social trends and developments. Written by veteran Asahi Shimbun writers, the column provides useful perspectives on and insights into contemporary Japan and its culture.