Obituary: Mondale remembered as a statesman who listened to Okinawa

TOKYO — Serving as U.S. ambassador to Japan, Walter Mondale did not fully trust reports supplied by Japanese officials. Instead, he insisted on going to places and talking to people himself to understand issues.

That compassionate approach was most evident when the U.S. announced in 1996 that the Futenma air base would be returned to Okinawa.

Standing beside then-Japanese Prime Minister Ryutaro Hashimoto in a news conference, Mondale said he realized that the U.S. could no longer ignore the pleas of locals who wanted to see the base returned to the prefecture.

Mondale died Monday at the age of 93 in his home state of Minnesota. He served as vice president under Jimmy Carter. He later lost to Ronald Reagan in the 1984 presidential election as the Democratic candidate.

Mondale had already left politics and was practicing law when President Bill Clinton recruited Mondale to serve as the ambassador in 1993.

In June 1995, he became the first ambassador to attend the annual memorial ceremony honoring those who lost their lives during the Battle of Okinawa.

That September, three U.S. servicemen were accused of raping a 12-year-old Okinawan girl. Sensing the anger among Okinawans, Mondale warned Clinton that the incident risked undermining the bilateral alliance.

During a summit with Clinton in February 1996, Hashimoto hesitated to bring up the Okinawa base issue.

After glancing at Mondale, Clinton prompted Hashimoto on whether had something to add. The Japanese leader finally brought up Futenma.

Clinton was the one who made the final decision two months later to return the Futenma base to Okinawa. But had Mondale not alerted Clinton in advance about the issue’s importance, it would likely not even have come up at the summit. 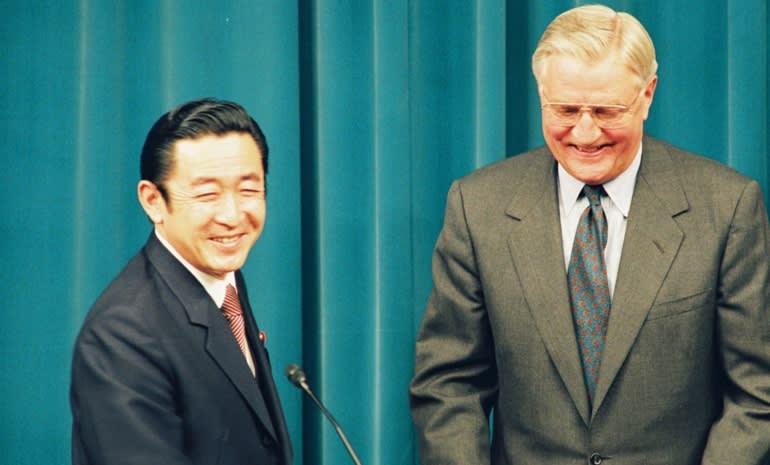 U.S. Ambassador to Japan Walter Mondale, right, and Japanese Prime Minister Ryutaro Hashimoto at a 1996 news conference to announce the return of the Futenma air base to Okinawa.

At the time, U.S.-Japan relations were at a low point because of trade frictions. Mondale, who always took a broader view, would say the two countries were irreplaceable partners, despite their differences. Without Mondale’s presence, the bilateral alliance could have very well been more tenuous.

Coloring that viewpoint is Mondale’s idealism based on freedom and equality. Mondale first got into politics after working on the first Senate campaign of Hubert Humphrey, who later went on to serve as vice president under Lyndon Johnson. Mondale admired Johnson’s immediate predecessor, John F. Kennedy.

Mondale lost his presidential campaign to Reagan in a landslide but made history by selecting as his running mate Geraldine Ferraro, the first female vice presidential nominee of a major party.

In his 2010 book “The Good Fight: A Life in Liberal Politics,” Mondale urged the U.S. to “show the world a better example.”

“Hopeful people around the world look to us — our sense of tolerance, our openness to change, our pragmatic tradition of solving problems, our acceptance of diverse people into our midst,” he wrote.

Mondale also believed that politicians should strive for dignity. In 2010, he said then-President Barack Obama lost his connection with the public by using teleprompters, calling the devices “idiot boards.”

President Joe Biden this month nominated Marc Knapper, who once served as an aide to Mondale during his Japan stint, as the U.S. ambassador to Vietnam. Mondale’s diplomatic spirit and his focus on alliances are expected to live on in the current administration.