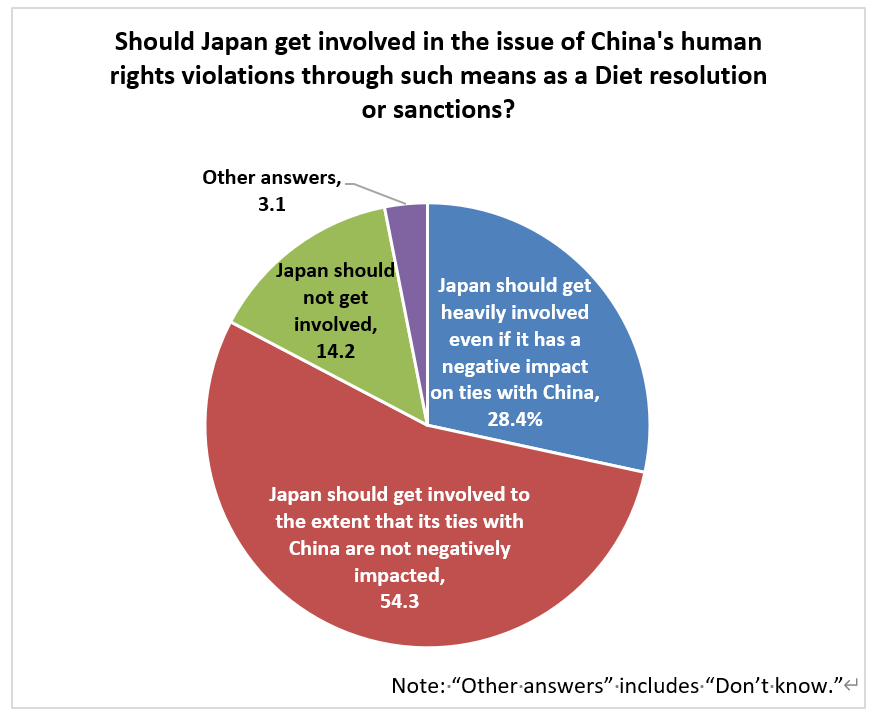 The joint public opinion poll conducted by the Sankei Shimbun and Fuji News Network (FNN) on April 17–18 probed views on whether Japan should get involved in addressing the violation of the human rights of Uyghurs in China’s Xinjiang Uyghur Autonomous Region and people in Hong Kong. A total of over 80% of respondents said that Japan should get involved in this international issue through such means as passing a Diet resolution or imposing sanctions. It looks like this will bolster the case of likeminded members of the ruling and opposition parties who aim to have the Diet adopt a resolution during the current Diet session.

By political party supported, 28.2% of LDP supporters said that “Japan should get heavily involved.” Meanwhile, 31.5% of respondents backing the Constitutional Democratic Party of Japan and 50.2% of those supporting the Japanese Communist Party also gave that response. Those supporting opposition parties are more likely to back Japan’s heavy involvement in the human rights matter. Komeito supporters showed the lowest level of support of all parties at 18%.

Sankei Shimbun asked Democratic Party for the People Lower House member Shiori Yamao, who is joint chair of the nonpartisan Diet members’ league for human rights diplomacy, for her views on the Sankei-FNN poll results showing that over 80% of respondents believe Japan should be involved in addressing China’s human rights issue. “We see the results of the poll as indicating a deepening of the public’s understanding of the matter. As the legislative branch of government, we would like to move forward with a Diet resolution (condemning the human rights situation in China) or developing sanctions legislation,” she commented.

[Polling methodology: A total of 1,180 men and women, aged 18 and over, across the nation were surveyed. The nation was divided into 11 blocs corresponding to the Lower House proportional representation districts. The survey was conducted by placing telephone calls on a random digit dialing (RDD) basis until the calculated number of responses obtained from each bloc corresponded to that bloc’s relative population. A weighted adjustment was then performed for such variables as gender and age. Calls were placed to both landline and mobile numbers in the ratio of 4:6. The survey was conducted on April 17–18, 2021.]