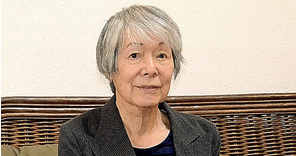 “People in my unit were buried alive.” “We were forced to walk 100 km without food or water.”

These are the kinds of stories that Yukako Ibuki (82) has heard from former American prisoners of war (POWs) for more than 20 years. These were part of the inhumane treatment they were subjected to at the hand of the Imperial Japanese Army.

In 2000, Ibuki, an English teacher at the time, visited a memorial ceremony for former American POWs held  in Yokohama. There, she met an American former POW who was in the “Bataan Death March” in the Philippines, during which a large number of POWs died. She was moved by the man’s statement that “hatred is a cage that imprisons you.” At the same time, she realized she didn’t know anything about that history.

Ibuki began attending gatherings and memorials for former POWs held overseas. She helped translate the POWs’ online testimonies into Japanese. Currently, she is working on an exhibition about the Japanese war effort, which is scheduled to open this fall at the Imperial War Museum in the UK.

Sometimes former POWs hatred her, but as she continued to listen to them, their faces would soften, and they would open up to her. “The most important thing, above all else, is to share the reality of the war,” Ibuki says.

What spurred her into action was the death of her cousin. He had no food but managed to escape from the battlefield, only to fall ill after returning home and die. His despairing eyes are etched in her memory. “War forces young people to go to an early death. It should never happen again.”

Not having the kind of stamina she used to, she stopped traveling to the U.S. in 2019. But she still corresponds with the former POWs. Some of the children of the POWs have also visited Japan, so she now has contact with the next generation.