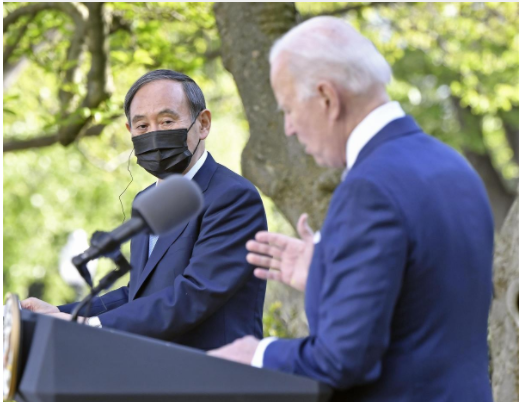 In a joint statement, Tokyo and Washington vowed to work together to respond to China’s growing maritime expansion, saying that peace and stability across the Taiwan Strait is important. We welcome the Biden administration’s departure from the business-deal diplomacy based on the “America first” policy of former President Donald Trump and its demonstration of emphasis on its alliance with Japan.

The problem is Japan’s diplomatic stance. Western countries have imposed sanctions on China over its political pressure on Hong Kong and human rights issues in the Xinjiang Uyghur Autonomous Region. Japan remains the only country among the Group of Seven (G7) nations that has not imposed sanctions on China. It is safe to say that Japan’s determination to conduct diplomacy with China is being tested.

The Sankei Shimbun pointed out, “Suga and Biden were united in their opposition to China’s unilateral attempts to alter the status quo in the East China Sea and South China Sea by force and intimidation.” And it analyzed: “With China in mind, they also affirmed the “importance of deterrence” and vowed to further strengthen the bilateral alliance. Their agreement was very appropriate.”

The Yomiuri Shimbun emphasized, “It is important for Japan and the United States, which share universal values such as freedom, democracy, human rights and the rule of law, to unite to heighten the international community’s trust in them and to urge China to change its hegemonic behavior.” The paper made a request: “Japan needs to sufficiently coordinate its China strategy with the United States and must be determined to share responsibilities with the United States.”

The joint statement stated “the importance of peace and stability across the Taiwan Strait.”

The Asahi Shimbun expressed concern, saying: “Should a security emergency occur around Taiwan, Japan could be pulled in. The Japanese government would likely be asked to provide logistical support to the U.S. forces responding to the crisis as security legislation enacted in 2015 allows Japan to do so “in a situation that has an important influence on Japan’s peace and security.” It then underscored, “Japan, for its part, should focus on diplomatic efforts to press for self-restraint by both sides and avoid any armed conflict in the region.”

The Mainichi Shimbun argued, “Stressing the importance of human rights, rule of law, and trade rules is vital, but that should be with the aim of coexisting with China, not with the aim of squeezing it out.” The daily also called for a unique Japanese strategy toward China, saying: “The Japanese and Chinese governments used to have strong personal connections, but these have weakened to the point it is difficult for the two countries to have a cool-headed dialogue. Strengthening the alliance with the U.S. alone will not be enough to break the stalemate with China. Japan needs its own China strategy, which does not rely on the U.S.”

On the other hand, Sankei insisted, “There is a grave danger that a crisis that starts in the vicinity of Taiwan will immediately spread to Japan.” It pointed out the necessity of beefing up defense capabilities, saying, “With a possible Taiwan crisis in mind and faced with the prospect that the United States will lose its superiority to China in deployment of missiles, Japan needs to beef up its defensive strength.”

The Nikkei stated: “From Washington’s point of view, the Senkakus and Taiwan are close neighbors and tied to issues that extend to the South China Sea. Japan cannot avoid doing its part to enhance deterrence.” It made a request: “Suga informed Biden of his intention to strengthen Japan’s defense capability. Tokyo needs to carefully calibrate with Washington the degree to which it will take on this role and firm up its preparations while gaining the understanding of the Japanese people.”

Yomiuri wrote, “If a military crisis arises in Taiwan, it will inevitably have a serious impact on Japan’s peace” and stressed, “It is appropriate for Japan and the United States to jointly issue a warning to China, which is intimidating Taiwan.”

China Coast Guard ships are invading Japanese territorial waters near the Senkaku Islands for days on end to crank up the pressure on Japan. Japan needs to be aware that a Taiwan contingency is by no means just somebody else’s problem.