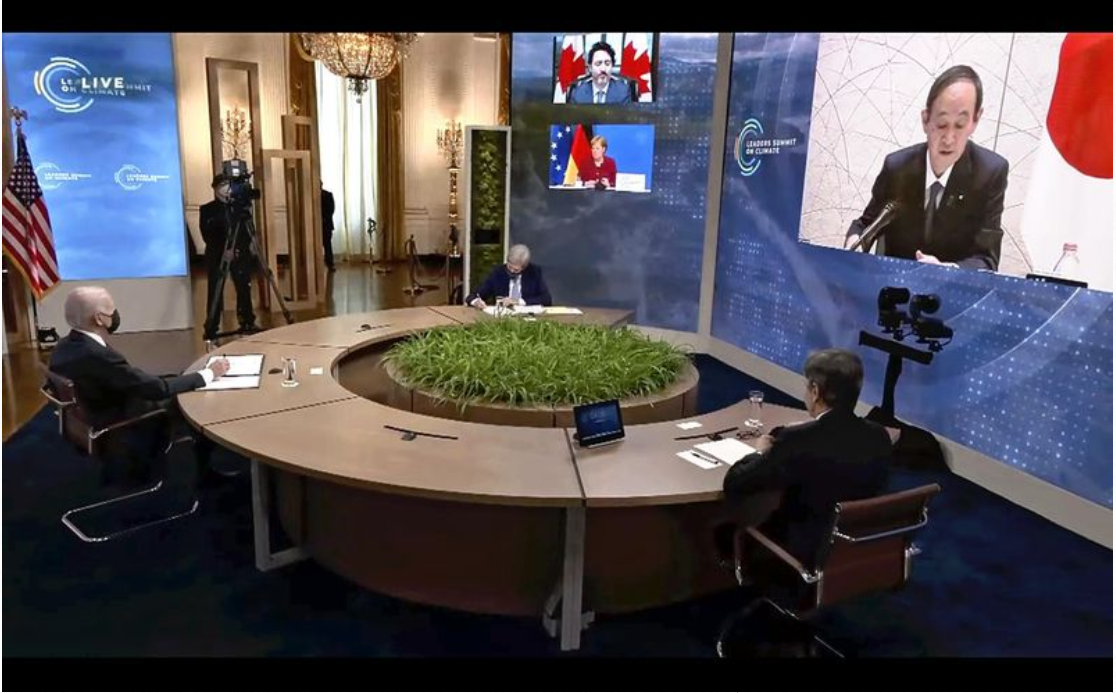 Under pressure to keep up with other nations in addressing climate change, Prime Minister Yoshihide Suga has announced a hefty increase in Japan’s greenhouse gas emissions reduction target, but it remains unclear whether the new goal of a 46% cut from 2013 levels will be achieved by fiscal 2030.

The United States, European nations and other countries had already revealed significant reduction targets, so Suga decided to announce a comparable figure at this week’s Leaders Summit on the Climate. Suga’s announcement was undoubtedly spurred in part by a desire to avoid falling behind in the international race to be seen as showing leadership on the issue.

■ Decision on the day

In early April, some media reported that the government would announce a new emissions reduction goal as soon as April 20. Suga grumbled to his close aides.

“Who is saying this has been decided?”

This was shortly before Suga’s April 16 summit meeting with U.S. President Joe Biden, for which climate issues were expected to be a major theme, and also before the U.S.-led online summit on climate change was held on Thursday and Friday.

Suga has a policy of reducing greenhouse gas emission to net zero by 2050, and he emphasizes it as a major pillar of his policies along with digital reform. He had intended to wait until the last minute before the climate summit to see what steps the United States, in particular, would take.

“No specific figure exists within the government,” a governmental source involved in coordination of the reduction target told The Yomiuri Shimbun on Wednesday evening. “Only the prime minister knows.”

Suga made his final decision on the new target on Thursday — the day it was announced.

“We have to take action, all of us,” Biden said at the online summit. “And this summit is our first step on the road we’ll travel together.”

Biden’s true intention was to display leadership in the international community on the climate change issue.

U.S. Secretary of State Antony Blinken said during a speech in Maryland on Monday, “It’s difficult to imagine the United States winning the long-term strategic competition with China if we cannot lead the renewable energy revolution.”

Soon after this month’s Suga-Biden summit meeting, a senior Japanese government official said, “During the talks, President Biden showed a very keen interest in climate change, so the prime minister felt strongly that announcing a half-hearted figure would not do.”

Suga entrusted two ministers close to him — Economy, Trade and Industry Minister Hiroshi Kajiyama and Environment Minister Shinjiro Koizumi — to sort out the practical details of the new 2030 emissions target.

Kajiyama insisted a goal of 35% to 40% was the maximum limit, due to factors including the patchy introduction and spread of renewable energy sources and the ongoing delays in restarting nuclear power reactors across Japan. In the third supplementary budget for fiscal 2020, the government set aside ¥2 trillion to support the development of new environment-related technologies, but 2050 remained the target date for achieving its emissions cut goal.

Koizumi, however, was adamant that a larger cut was needed.

“If we want to show the world just how serious Japan is about tackling this issue, we need to set a bold target rather than a simple feasible figure calculated by adding up what can be done,” Koizumi said. He recommended slashing Japan’s 2030 greenhouse gas emissions by 50% from fiscal 2013 levels.

As the Japan-U.S. summit and online climate change meetings neared, a proposal of a 45% cut appeared inside the government as a compromise between the two opinions. Suga suggested a 46% reduction — adding an additional 1% and showing intent to set his own target.