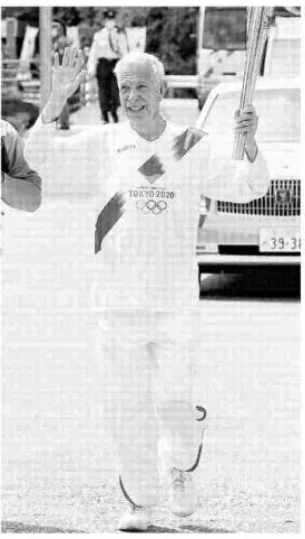 Hans Vonderrecke, a 67-year-old American national, carried the Olympic torch by crossing a bridge over the Hijikawa River, which flooded in the torrential rains in western Japan in July 2018 and inundated many houses in Ozu City, Ehime Prefecture. He smiled proudly, “I took part in the relay because I wanted to let people around the world know how hard the people in Ozu are trying to reconstruct their city by helping each other and how warm-hearted they are.”

Vonderrecke came to Japan from the U.S. in 2000 and worked as a financial consultant in Tokyo and elsewhere. He married Kazuko, 59, in 2012 and moved to Ozu City in 2016 to care for her mother. He taught English part-time at a local junior high school that was closed at the end of March.

When the torrential rains hit the city two years after he moved there, some 2,800 houses were damaged. His house escaped the disaster, but a dormitory for junior high school students along the Hijikawa River and one of Kazuko’s relatives’ houses were inundated. So he helped to remove mud and clean up the houses. He was saddened by the sight of a city mercilessly changed. “But my love for Ozu grew even more after I saw the residents caring for each other,” he said.

When he crossed the finishing line near the bank of the Hijikawa River, he held the torch up to the sky and shouted in Japanese, “Arigato Ozu, ganbare! [Thank you, Ozu. Hang in there!]”