Walter Mondale was the epitome of the heavyweight ambassador

TOKYO — When Walter Mondale passed away this week, an iconic photo of former Japanese Prime Minister Ryutaro Hashimoto and him — then the U.S. Ambassador to Tokyo — announcing the return of U.S. Marine Corps Air Station Futenma in Okinawa to Japan made its way back into the news. It was April 1996.

This news conference had a backstory. Hashimoto was hoping to announce it next to U.S. President Bill Clinton, who was expected in town the following week. He wanted to portray that the two heads of governments had come to the historic agreement.

But the U.S. side wanted Defense Secretary William Perry to represent Washington. It was Perry who was responsible for putting together the agreement.

Hashimoto had deep respect for Perry, but cringed at the idea. From protocol, it should be the president, not the defense secretary. Mondale, a former vice president who twice made the Democratic presidential ticket, was the natural choice to step in.

Despite the short notice, Mondale was more than willing to fill in for Perry and shook hands with the prime minister in the news conference.

Mondale had been briefed throughout the process of the difficult negotiations between the two countries. Kurt Campbell, currently U.S. President Joe Biden’s Indo-Pacific coordinator, was in charge of working-level negotiations as a deputy assistant secretary of defense for Asia and the Pacific.

Thanks to Campbell’s extensive groundwork, the typical three-way rivalry between the defense and state departments and the White House never got in the way of the negotiations. And all three sides felt compelled to honor the view of Mondale, a respected veteran of the Democratic Party. 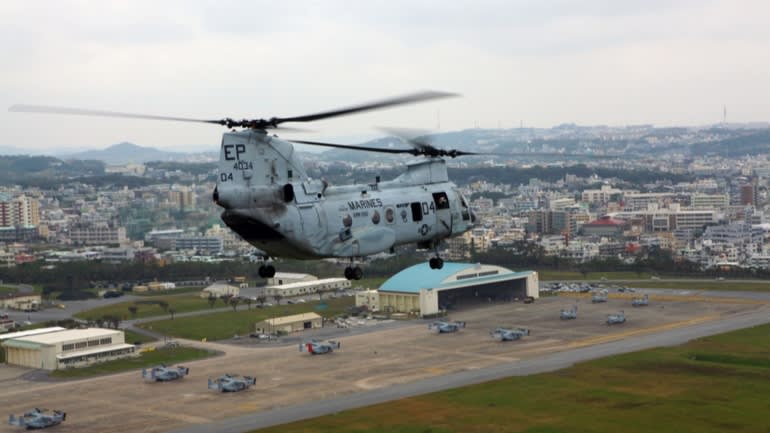 A CH-46E Sea Knight helicopter makes its last flight over Marine Corps Air Station Futenma in 2012, before being replaced by MV-22B Ospreys. In 1996, the Clinton administration agreed on returning Futenma, located close to a residential area in Okinawa, to Japan, but the move has not been made.  (Photo courtesy of the U.S. Marine Corps)

Mondale was particularly concerned about the Sobe communication site used by the U.S. military. Because of the refusal by the Okinawa governor to renew the lease on behalf of land owners, the land was technically illegally occupied. He told negotiators to be aware of the importance of resolving the Sobe land issue.

Born a minister’s son in Minnesota, Mondale served in the U.S. Army during the Korean War. On a military scholarship, he went on to law school.

His path to politics was typical of the time. When working as a lawyer, he was appointed the state attorney general in 1960 by Minnesota’s Democrat governor. He took over a Senate seat vacated by Hubert Humphrey, who became vice president under President Lyndon Johnson.

Japanese officials who met with Mondale during his time in Tokyo said that the ambassador had the confident demeanor of a “statesman groomed in the era when the U.S. was an unrivaled global power.”

He retired from politics after his second loss in the presidential election in 1984. While back in Minnesota practicing law, he was asked to serve as ambassador to the U.K. and France but turned it down. As his last public service, he chose Japan. Some said his wife, Joan, as an artist had a strong interest in Japanese pottery.

The widely held view in Washington is that Japan likes to have a big shot U.S. ambassador in Tokyo.

Mike Mansfield, a former Senate majority leader, served as ambassador for over 11 years under both Republican and Democrat presidents. He was steadfast in his opposition to the Vietnam War. But Mansfield was a skilled arbitrator for easing escalating trade frictions between the U.S. and Japan.

Tom Foley, who built strong relations to Japanese politicians, was speaker of the House before becoming the ambassador. Howard Baker was picked by President Ronald Reagan to be his chief of staff after serving as Senate majority leader. Both had direct access to the White House while in Tokyo.

The U.S. sent those political heavyweights to Tokyo as the Japanese economy was of great interest to Washington. China’s economy was still small.

Now the Japanese economy is out of steam, and in turn China is the “pacing threat” to the U.S., expanding its clout amid a pandemic.

The joint statement released by Biden and Prime Minister Yoshihide Suga last week was tantamount to declaring that Japan is at the forefront of the U.S.-China standoff. Who will the U.S. send to Japan to fill a post that has been vacant since Bill Hagerty left in July 2019? 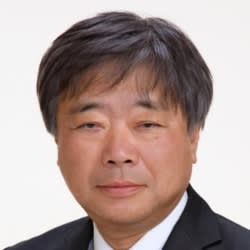 Akihiko Miyamoto is a journalist specializing in Japanese politics and foreign affairs. For Nikkei, he covered the prime minister’s office, the Foreign Ministry and the ruling Liberal Democratic Party over many years. In 1996, as a Washington correspondent, he broke the news that the U.S. would return a marine air base in Futenma, Okinawa, to Japan, which won that year’s top media award. Since June 2018, he has been president of Aichi Television Broadcasting.