MOSCOW — China and Russia have conducted a series of military exercises in the brutal cold of the Siberian mountains, just as both countries’ tensions with the U.S. heat up and speculation swirls over the possibility of deeper cooperation between Beijing and Moscow.

About a dozen Chinese troops from the People Liberation Army’s 78th Group Army participated in Sayan March 2021, a competition held April 15-17 under the framework of the Russian-led International Army Games.

This was China’s first crack at the annual event in Siberia’s Western Sayan mountain range, and its soldiers fared well: They placed second, after their Russian hosts, in the final results announced earlier this week.

Viktor Murakhovsky, editor-in-chief of the influential Russian defense journal Arsenal of the Fatherland, told Nikkei Asia that the Siberia competition allowed the Chinese troops to not only practice in challenging conditions but also to exchange knowledge with their Russian counterparts. “Military personnel always learn something new and valuable for themselves when they participate in competitions together and can learn how others implement certain tasks,” he said.

The Chinese soldiers had to march 50 km across the mountain range in under two days. Along the way, they completed tasks like skiing down steep slopes, finding the victims of an avalanche, testing their shooting and grenade-throwing skills, and transporting wounded comrades from hard-to-reach areas.

This year’s Sayan March came as China’s military maneuvers near Taiwan and Russian forces’ activities near Ukraine put both countries at odds with the Joe Biden administration in the U.S. It also followed the PLA’s monthslong and deadly confrontation with India in the Himalayas.

In recent weeks, China has conducted several naval drills off the coast of Taiwan. In addition, Beijing last week sent 25 fighter jets and nuclear-capable bombers over the Taiwan Strait, in the largest reported incursion into Taiwan’s airspace to date.

China has said these “combat drills” were meant to signal that its “determination to curb Taiwan independence and Taiwan-U.S. collusion is not just talk.” 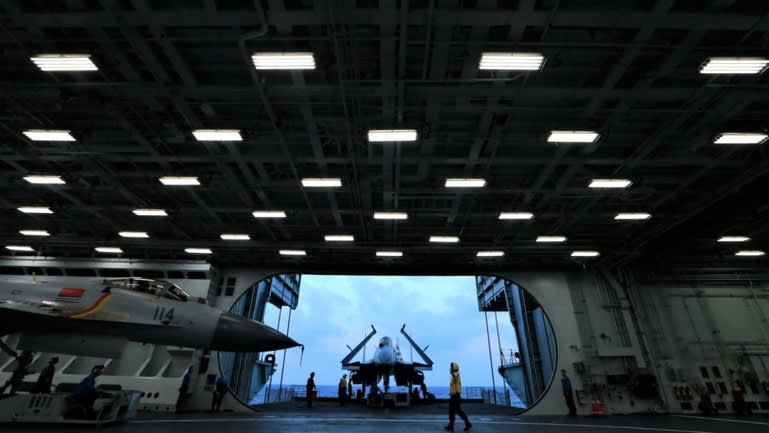 Fighter jets are seen on China’s aircraft carrier Liaoning during a military drill in the East China Sea in April 2018.   © Reuters

Early last week, U.S. Secretary of State Antony Blinken warned that it would be a “serious mistake for anyone to try to change the status quo [in Taiwan] by force,” without specifying what a U.S. response would look like. Also last week, President Biden and Japanese Prime Minister Yoshihide Suga issued a joint statement that mentioned Taiwan — specifically the Taiwan Strait — for the first time since 1969, before either country had normalized relations with Beijing.

Meanwhile, Russia’s military presence on the border with Ukraine has stirred anxiety, though Moscow on Thursday announced a pullback of thousands of troops that had gathered in the area on top of a permanent contingent.

Over the past several months, a fragile ceasefire between Ukrainian government forces and pro-Russian separatists in eastern Ukraine has broken down. Exchanges of gunfire and artillery salvos have resulted in both military and civilian casualties. Amid this escalation, Russia held a series of large-scale military exercises in Crimea and its western regions bordering Ukraine, while reinforcing its naval presence in the Black Sea.

The Kremlin’s point man on Ukraine, Dmitry Kozak, declared that Russia “would have to come to the defense” of Russian citizens in eastern Ukraine if the situation continued deteriorate, warning Kyiv that the outbreak of major hostilities would mark “the beginning of the end of Ukraine.” 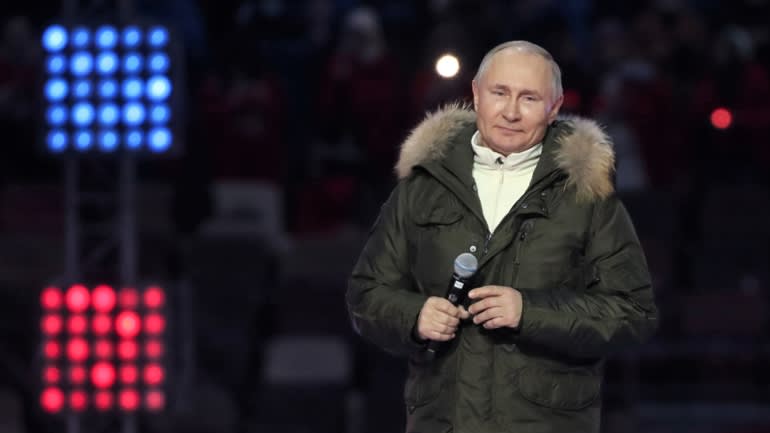 Russian President Vladimir Putin attends a concert marking the seventh anniversary of the annexation of Crimea in Moscow on March 18.   © Reuters

All this has sparked alarm in Washington, with the U.S. European Command raising its alert level for Ukraine to potential imminent crisis — the highest level.

In a phone call with Putin last week, Biden urged Moscow “to de-escalate tensions” and proposed a bilateral summit.

But ties between the powers have soured in other ways too: The Biden administration last week announced sanctions against 32 Russian entities and individuals accused of interfering in the 2020 U.S. presidential election and launching cyberattacks. The administration also expelled 10 diplomats from the Russian Embassy in Washington and banned American banks from purchasing Russian sovereign debt.

“We really do not want to burn bridges,” Putin said in his state of the nation speech on Wednesday. “But if someone mistakes our good intentions for indifference or weakness and intends to burn or even blow up these bridges, they must know that Russia’s response will be asymmetrical, swift and tough.”

Some analysts say the Biden administration’s stance could push the Kremlin to seek a closer military relationship with China. Anatol Lieven, a senior fellow at the Washington-based Quincy Institute for Responsible Statecraft, told Nikkei that although China and Russia are not yet prepared to fight for each other, “they are already sharing weaponry, and it is possible that at some stage they might jointly create simultaneous crises so that U.S attention is split.”

“The United States has been driving Russia steadily toward China for the past 25 years,” he said. “What would really consolidate this would be a complete economic breach between Russia and Europe, which it seems Washington wants to create.”

Whether either Russia or China actually wants a formal alliance, though, is a matter of much debate.

In October, Russian President Vladimir Putin himself told an audience of foreign policy experts that a military alliance with China is “quite possible.”

However, Russian Foreign Minister Sergei Lavrov appeared to walk back those comments earlier this month when he told state television, “We regard NATO as an example of a military alliance in the traditional sense, and we know that we do not need such an alliance.”

What is clear is that the two neighbors have bolstered their arms trade in recent years, with Russia supplying 77% of China’s weapons imports between 2016 and 2020, according to the Stockholm International Peace Research Institute.

And since 2012, Beijing and Moscow have been holding regular joint military drills at sea, in the air, and on land — including the frigid mountains of Siberia.