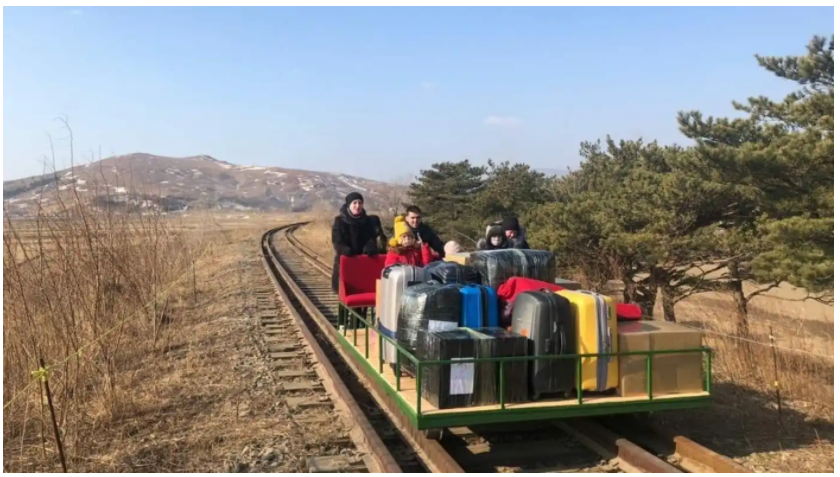 Russian diplomats and family members use a hand-pushed rail trolley to leave North Korea on Feb. 25. (Photo from the Russian foreign ministry, Reuters)

SEOUL – North Korea, which has closed its borders since last year due to the COVID-19 pandemic, is showing signs of fully resuming trade by allowing cargo ships to sail between the country and China. The move was driven by the economic plight that was serious enough to prompt foreign diplomats stationed in the capital of Pyongyang to escape from the country in droves after failing to get even daily necessities. But even though North Korea resumes trade, the country is nowhere near the normalization of its economy.

On April 26, North Korean state-run TV reported that 87 “model schools” in Pyongan-Pukto [North Pyongan Province] in the northwest of the country resumed regular classes in a bid to play up at home and abroad the nation’s victory over COVID-19. But the reality is that poverty is even rampant in Pyongyang and this is symbolized by the flight of Russian diplomats.

According to an image released by the Russian foreign ministry in February and other sources, eight people, including diplomats who work at the Russian embassy in Pyongyang and their family members, travelled 34 hours by train and bus to reach the Russian border and crossed the border by hand-pushing a rail trolley. They had to do so because there were no means of transportation due to the border closure.

The Russian ambassador to North Korea previously reported that it was difficult to get flour, sugar, and other necessities and “children do not go to school throughout the year.” On March 18, 38 people, including Czech diplomats and staff members of the World Food Programme (WFP), left North Korea by land. There are reportedly no foreign nationals working for the United Nations organization and international non-governmental organization (NGOs) in North Korea.

In January, Worker’s Party General Secretary Kim Jong Un released a five-year plan for the DPRK to rebuild the economy on its own. But the plan did not move ahead as intended and the North Korean leader soon removed the party official in charge of it. In April, Kim announced that he “has decided on an arduous march.” An “arduous march” is a slogan used in the late 1990s when large numbers of people died of hunger. The slogan was intended to help the nation escape the predicament by tightening the grip on the regime.

Kim is desperate to please Pyongyang residents by pushing forward the development of a large residential area in the city. But even the construction of Pyongyang General Hospital, which was scheduled to be completed in October last year under the auspices of Kim, is yet to be announced. The delay is believed to be attributable to the inability to import materials and equipment because of the border closure and the sanctions imposed by the international community.

Though negotiations with the U.S. toward the complete denuclearization [of the Korean Peninsula] are necessary for the lifting of sanctions and the rebuilding of the economy, Kim has refused to contact the U.S. administration of President Joe Biden.