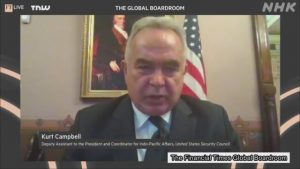 NHK reported online on Wednesday that National Security Council Coordinator for Indo-Pacific Affairs Campbell pointed out in an online event on Tuesday that China is taking provocative actions in connection with the Taiwan Strait and said: “We need to demonstrate that we are closely watching the situation and ready to protect the peace and stability of the Taiwan Strait through an official statement.” He also reportedly commented on the joint statement issued by the leaders of the United States and Japan that referred to Taiwan for the first time in about 50 years and explained that this was to “clarify our intention to protect peace in Taiwan by sending a clear message to Taiwan and China that we will strengthen our deterrence.” Campbell also reportedly stressed the importance of cooperation between the United States and Japan by saying: “We are determined to take appropriate measures together with Japan.” When asked about the U.S. position on the Senkakus, Campbell reportedly responded: “That is clear. These islands fall under the administration of Japan, and any challenges against them will be interpreted based on the U.S.-Japan Security Treaty. We have reconfirmed this at the highest level of the Biden administration.”