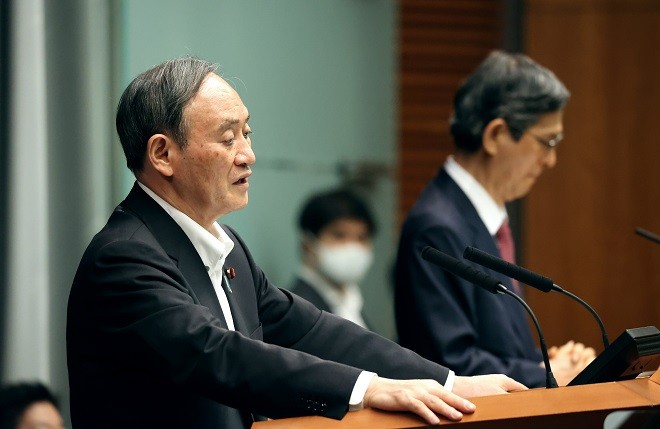 Prime Minister Yoshihide Suga, left, answers a question at a news conference in Tokyo on May 7. Shigeru Omi, chairman of a panel of experts advising the government on the COVID-19 crisis, is standing next to him. (Koichi Ueda)

The government decided May 7 to extend the COVID-19 state of emergency until May 31 while adding two more prefectures, Aichi and Fukuoka, to the list, bringing the total to six.

It also decided to apply the quasi emergency pandemic response program known as “man-en boshi” to  Hokkaido, as well as Gifu and Mie prefectures, from May 9 and extend those steps to five prefectures: Kanagawa, Saitama and Chiba surrounding Tokyo and Ehime and Okinawa until May 31.

The number of seriously ill COVID-19 patients across Japan hit record levels almost every day, highlighting the ferocity of the current wave of infections that struck the Kansai region of western Japan especially hard.

The government’s decision to extend and expand the restrictions is an inevitable response to reduce the burden borne by health care workers and save as many lives as possible.

Many health experts voiced skepticism about the original 17-day timeframe for the latest emergency curbs, saying it was too short and made it difficult to properly evaluate the effects of the measures.

But the government ignored the warning and tried to sell the public on its plan by giving it a reasonable-sounding label of a “short-term and intensive” effort to bring the virus under control.

The miserable failure of the government’s hope-for-the-best plan, which was grounded in an unreasonably optimistic view, has delivered an additional blow to the damaged credibility of Prime Minister Yoshihide Suga and his administration.

This must have been especially galling to many businesses that have been asked to suspend or shorten their operations. They gritted their teeth and responded to the government’s request, believing the painful run would not last too long, and then found that the finish line had been moved further ahead.

The government has a duty to offer a detailed and convincing explanation about its decision and make sure hard-hit businesses are properly compensated.

While extending the state of emergency, the government also decided on a partial easing of the restrictions on businesses it had asked for. It was a questionable move that may seem to be intended as pain relief.

Although it is up to the prefectural governors to decide whether to implement the easing in their prefectures, the government’s inconsistent decisions inevitably send out a confusingly mixed message.

The government should remember how its half-baked, inconsistent decisions concerning the “Go To” programs to support the battered tourism industry only made things worse.

New, more contagious variants of the coronavirus strain known as SARS-CoV-2 are emerging as the main sources of infections across Japan. Alarmingly, cases of infections with the India variant, which may be linked to a deadly second coronavirus wave that has swept the country in recent weeks, have also been discovered in this nation.

All these facts should worry policymakers, but Suga has tried to downplay the seriousness of the situation and justify his policy responses to the latest wave of infections by reiterating that flows of people are “undoubtedly diminishing.”

Suga appears to be more interested in dodging responsibility than in tackling the health crisis head-on. Does he fail to realize that his behavior is the main reason his words do not find resonance with the public?

Suga also likes to say “while listening to the opinions of experts” as he describes his plans to deal with the challenge. But he has not matched his words with actions, as indicated by the much-questioned 17-day timeframe for the latest emergency.

As they were asked for their opinions about the state of emergency on May 7, many members of the panel of experts advising the government on its responses to the pandemic argued that the criteria for lifting the measure should be made stricter to focus policy efforts on reining in the spread of the virus. Unless the Suga administration is willing to swallow this bitter pill prescribed by the experts, the crisis will not end.

The public has become jaded with COVID-19 restrictions and somewhat accustomed to a state of emergency as these measures have been taken and terminated repeatedly over the past year or so. Combined with this mental state, glacial progress in the nation’s vaccination program has caused society to be enveloped with a cooped-up feeling.

What the government needs to do is clear. It should first set clear and realistic goals and map out and describe convincing plans to achieve them. It also needs to be willing to engage in sincere and honest conversations over its policy responses and admit any mistake and failure it may make to improve its strategy through an analysis of the causes.

The mission of policymakers is to do all they can to win over the public in efforts to overcome this crisis instead of lamenting a lack of public cooperation.

–The Asahi Shimbun, May 8