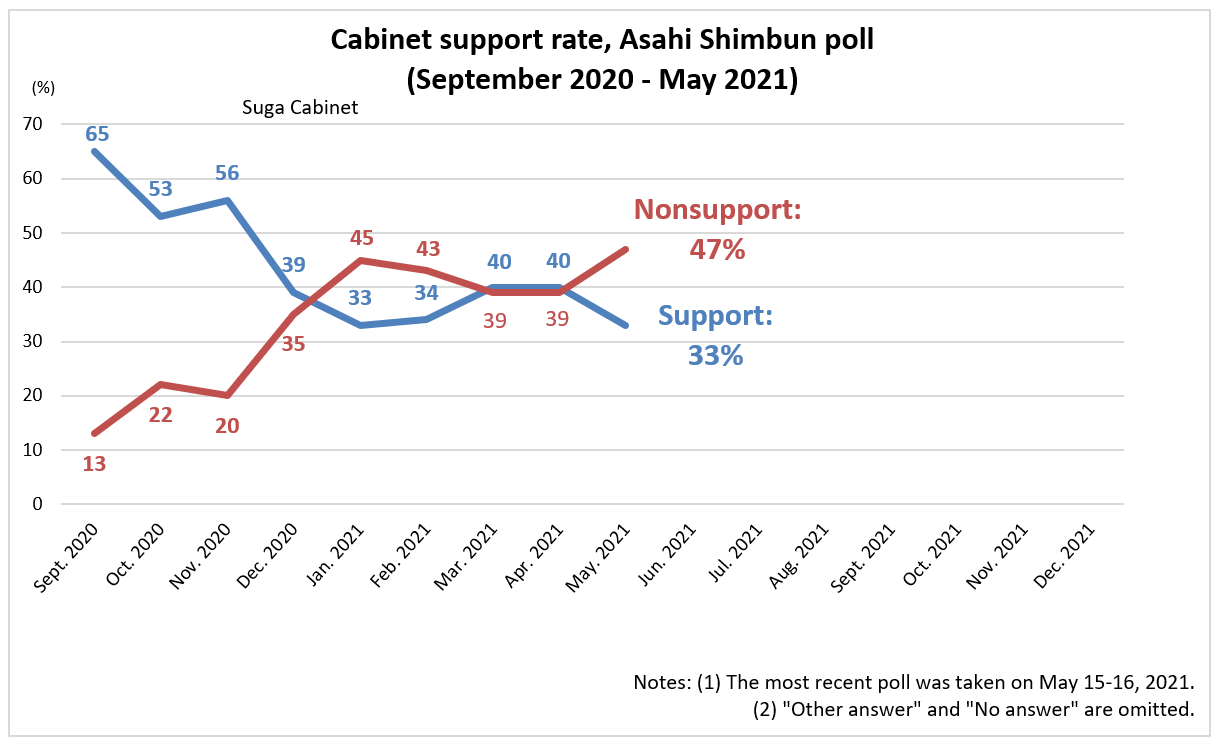 The approval rating for the Suga Cabinet plummeted to 33 percent, matching the lowest level since the administration was formed in September, while dissatisfaction with the COVID-19 response increased, an Asahi Shimbun survey showed.

The Cabinet approval rating was down sharply from 40 percent in the previous survey taken in April.

The disapproval rating jumped to 47 percent from 39 percent, according to the nationwide telephone survey of voters conducted on May 15 and 16.

Sixty-seven percent of respondents gave a “low evaluation” of the government’s response to the COVID-19 crisis, up from 61 percent in April. At the same time, 23 percent gave the government a “high evaluation,” down from 29 percent.

The last time the Suga Cabinet’s approval rating was 33 percent was in January, during the third wave of novel coronavirus infections.

Among respondents in their 60s, the approval rating plunged from 39 percent in April to 25 percent in the latest survey, while it fell from 38 percent to 30 percent among those 70 or older.

Sixty-six percent of respondents said the government is “largely responsible” for Japan’s vaccination program falling behind those of other developed nations, while 28 percent said it “was not so much responsible.”

Among those 70 or older, who have started receiving the vaccine, 73 percent said the government is “largely responsible” for the delays. The ratio was 80 percent among respondents in their 60s.

Overall, 47 percent of respondents gave a “high evaluation” of the government’s vaccination efforts, but 52 percent gave low marks. In the March survey, 69 percent gave “high marks” for the vaccine program.

The survey also asked about Suga’s professional attitude toward tackling the COVID-19 pandemic.

Sixty-one percent of respondents said, “I can’t trust him,” compared with 27 percent who said, “I can trust him.”

Even among supporters of the ruling Liberal Democratic Party, 41 percent said they cannot trust the prime minister concerning measures to battle the health crisis.

The Suga administration has expanded and extended the latest COVID-19 state of emergency to May 31. Forty-one percent of respondents believe the declaration is “effective” in preventing the virus from spreading further, but 59 percent consider it “ineffective.”

The LDP approval rating decreased to 30 percent from 35 percent in April, the lowest figure since Suga formed his Cabinet.

Respondents were asked which party they would vote for in the proportional-representation constituency if a national election were held now.

The ratio of those picking the LDP sank to 35 percent from 40 percent in April, while that for the main opposition Constitutional Democratic Party of Japan increased to 17 percent from 14 percent.

The survey was conducted by contacting both landline telephone numbers and mobile phone numbers selected at random by computer.

It received 608 valid responses, or 54 percent, of the 1,135 landline numbers of households with at least one eligible voter each that the survey contacted.

There were 919 valid responses, or 45 percent, from 2,056 mobile phone numbers of eligible voters that were called. The valid responses totaled 1,527.