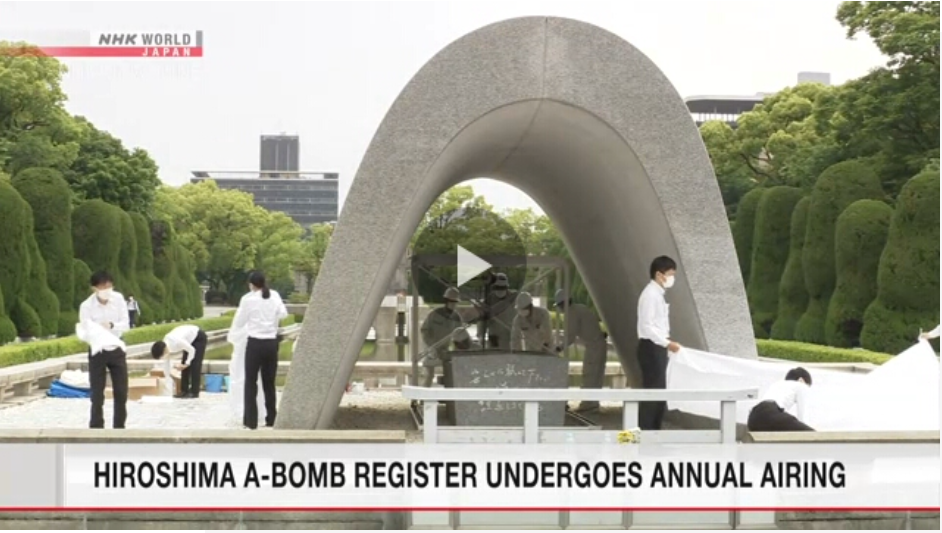 City officials in Hiroshima have opened a stone chamber and removed a registry that contains the names of the 1945 atomic bombing victims, in order to air it out and protect it from dampness.

This is done every year in May by the city of Hiroshima.

On Wednesday, 18 officials gathered at Hiroshima Peace Memorial Park and offered silent prayers for the victims at 8:15 a.m., the exact time that the atomic bomb was dropped on the city on August 6, 1945.

The officials took 120 volumes of the registry out of a cenotaph and laid them on a white cloth.

They turned each page to check for damage and to allow the pages to dry out.

The registry contains the names of 324,129 people who were exposed to radiation. It also contains the dates on which they died. Those dates range from the day of the bombing until August 5, 2020.

The city used to invite students visiting Hiroshima on school excursions to observe the work. However, students were not invited this year or last year, due to the spread of the coronavirus.

Sumida Tatsuya is one of the officials. He said that, as they worked, they thought about the large number of people who were victimized by the bombing. He added that he hopes the work will help to bring about a world without nuclear weapons, which is what the survivors of the bombing want.

The names of the recently deceased will be added to the registry starting in June. The registry will be returned to the cenotaph on August 6.