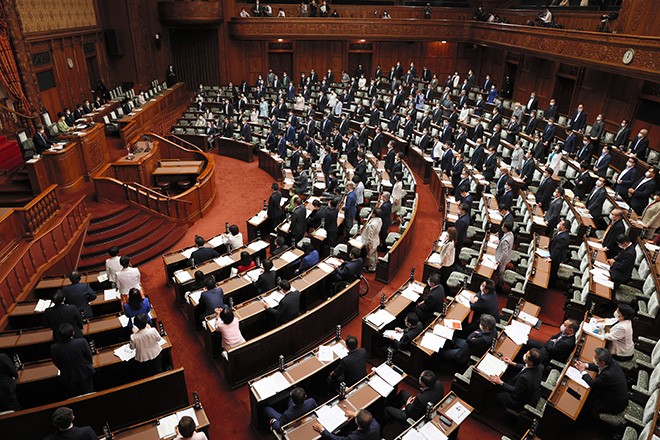 The Upper House plenary session passes a revision to the Juvenile Law on May 21. (Koichi Ueda)

Stiffer penalties await 18- and 19-year-olds for a wider range of crimes under revisions to the Juvenile Law approved by the Upper House on May 21.

Another key change allows the media to report the names of suspects if they are indicted.

Having passed the Diet, the revised Juvenile Law will take effect from April 2022 along with a change to the Civil Law that will lower the age of adulthood to 18. Those revisions reflect an earlier decision to change the voting age to 18.

Under the current Juvenile Law, suspects’ cases are sent to a family court, which looks into the family background and details of the crime. Those aged 16 or over who commit crimes that lead to loss of life are now referred by the family court to prosecutors for further investigation.

Under the revised Juvenile Law, 18- and 19-year-olds can also have their cases sent to prosecutors for a much wider range of crimes that carry a minimum penalty of one year in prison. Crimes covered by the change include robbery, forcible sexual intercourse and arson.

A change will also be made in the protection of 18- and 19-year-olds whose cases are not sent to prosecutors. Traditionally in such cases, the person will be sent to a juvenile training school for correctional education or placed under probation.

Under the current Juvenile Law, individuals considered at risk of committing crimes in the future can have their stays in juvenile training schools or their probationary period extended beyond the period decided by the family court. But with the revision, upper limits will be placed on the stays and probation period in line with the seriousness of the crime.

Although opposition lawmakers criticized the legislation in the Judicial Affairs Committees of the two chambers of the Diet, the ruling coalition majorities voted for the legislation.

One supplementary provision included in the bill calls for a review of the revised law after five years if the need arises.