TAIPEI – The temporary head of the U.S. Embassy in Japan visited Taiwan’s representative at his official residence in Tokyo on Monday, the first time a U.S. diplomat has done so since Taiwan and the United States severed diplomatic ties 42 years ago. 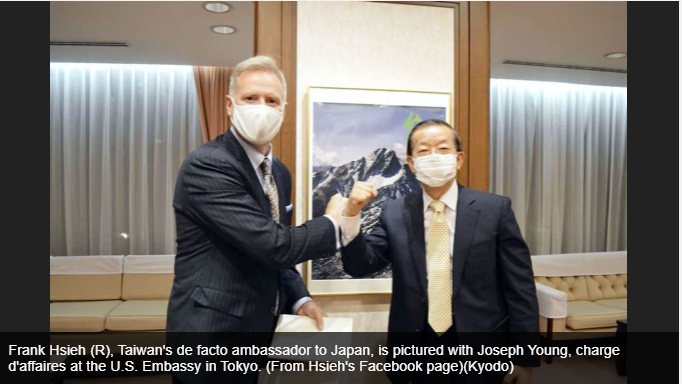 Taiwan’s de facto ambassador to Japan, Frank Hsieh, said on his Facebook page on Tuesday that he invited the U.S. Embassy’s Charge d’affaires Joseph Young to have dinner with him at his official residence to discuss regional peace and prosperity among other issues. They were joined Japanese politicians and friends.

“This is the first time, and a new beginning,” Hsieh wrote. “It bears great significance for the three parties to strengthen contacts and cooperation.”

Young tweeted, in both English and Japanese, on Tuesday that it was always good to see Hsieh and that they “had another productive conversation about our shared regional priorities.”

The latest development comes after Hsieh and Young met at the U.S. diplomat’s official residence in March, the first such meeting between the top envoys of Taiwan and the United States in Japan since Washington switched diplomatic allegiance from Taipei to Beijing in 1979.

After their March meeting, Young tweeted, also in English and Japanese, that the two “discussed our shared priorities across a wide range of topics, including our vision for regional stability, economic prosperity, and stronger people-to-people ties.”