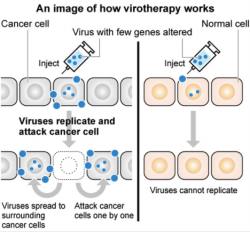 Japan is expected to approve a drug for virotherapy treatment for the first time, which uses a virus to track down and destroy cancer cells inside a patient.

A special committee of the health ministry on May 24 approved the sale and production of Teserpaturev, a cancer drug developed by Daiichi Sankyo Co. and others.

It will be the first time for a virotherapy drug to be approved in Japan.

Upon approval, Teserpaturev will be used to treat patients with malignant glioma, a type of brain cancer.

There are an estimated 2,500 patients who have glioblastoma in Japan, a fast-growing and aggressive tumor that causes nerve damage such as hand and foot cramping.

With the new drug, a particular virus will be injected into a brain tumor up to six times at regular intervals.

Tomoki Todo, a professor at the Institute of Medical Science at the University of Tokyo, altered three genes of herpesvirus and designed the virus to replicate only inside cancer cells when it is injected into the body and attack the cancer cells.

The virus does not replicate inside normal cells. 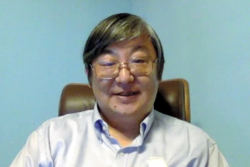 Clinical trials were conducted for glioblastoma patients who had not shown sufficient improvement after receiving standard treatment such as surgery and anticancer drugs and whose cancers had recurred.

According to an interim analysis of 13 patients, the one-year survival rate was 92.3 percent.

It was significantly longer than the survival rate after a typical standard glioblastoma treatment, which is 15 percent, although a simple comparison cannot be made.

In an analysis of 19 patients, the median value of survival period under the targeted therapy was about 20 months.

It was difficult to assess the survival rate based on the data collected at a facility. But the ministry’s committee concluded in the analysis, including an examination of the shrinkage of a tumor, that Teserpaturev showed a certain degree of effectiveness.

The drug has been subjected to the central government’s system to review potential drugs with an examination period shorter than usual.

The committee approved the use of Teserpaturev with the requirements that the researchers will use the drug for patients and collect data for seven years and reconfirm its effectiveness and safety.