Military might and flashpoints shift from West to East

TOKYO –The center of global military might and new international flashpoints are shifting from West to East.

The U.S. has been deploying more troops in the East Asian and Pacific regions than in Europe and the Middle East over the past two decades. The change reflects China’s rise as a major threat to security after the East-West confrontation during the Cold War and fights against terrorism.

Overseas strategic aims for America have reached a turning point. President Joe Biden has decided to withdraw all U.S. troops from Afghanistan by September, while the joint statement issued at the summit between Biden and Japanese Prime Minister Yoshihide Suga in April referred to peace and stability in the Taiwan Strait — a clear signal that the U.S. is serious about checking China.

Using data from the U.S. Department of Defense, Nikkei traced changes in the overseas deployment of American troops. In 2000, the U.S. had 69,000 troops in Germany, more than anywhere else. Following the 2001 terror attacks, the U.S. military shifted its focus to the Middle East, deploying at one point more than 100,000 troops each in Afghanistan and Iraq.

In 2013, then-President Barack Obama said the U.S. was no longer “the world’s policeman.” The U.S. cut overseas troops by around 50% in the 10 years till 2020. Still, it has retained a strong presence in its allies in East Asia — Japan and South Korea.

To examine moves by other countries, Nikkei analyzed changes in global military strength and hardware, using data from Military Balance, an assessment of the world’s militaries by the International Institute for Strategic Studies, a British research institute. Global military might has continued to shrink. In Europe and the countries of the former Soviet Union — the frontline during the Cold War — military strength has been slashed more than 50% over the past three decades.

In contrast, emerging nations and those near China have boosted troop strengths. In those 30 years, Indonesia has increased its armed forces by 40% and the Philippines by 30%. India, which has experienced a number of disputes with its neighbors, has expanded troops by 15%. The weight of Asia in terms of military strength has sharply increased.

Meanwhile, China has reduced its troop strength but noticeably boosted its military hardware. Despite fielding no modern fighter jets or bombers in 1990, the country now is inching up on the U.S. in the number of fighter jets, and has more than the combined total of the Japanese Self-Defense Forces and the U.S. military in Japan.

Japan, South Korea and Taiwan are looking to field new weapons, with China being mainly responsible for the arms buildup. Adm. John Aquilino, who became commander of the U.S. Indo-Pacific Command at the end of April, warned against China’s possible invasion of Taiwan at a Senate hearing in March, saying that “this problem is much closer to us than most think.”

U.S. Defense Secretary Lloyd Austin, visiting Japan in March, said: “Our goal is to make sure that we maintain a competitive edge over China or anyone else.”

For the past 20 years, U.S. attention has been diverted by issues in the Middle East, while China has modernized its military and engaged in “coercive” behavior in some cases, said Austin, who served as commander of U.S. Central Command in charge of military affairs in the Middle East.

“The U.S. urgently needs to recover a military balance in [Asia],” said Katsuya Tsukamoto, head of the Security and Economy Division at the National Institute for Defense Studies. “It is now strengthening its forward deployment capabilities in a bid to contain China’s further rise.” 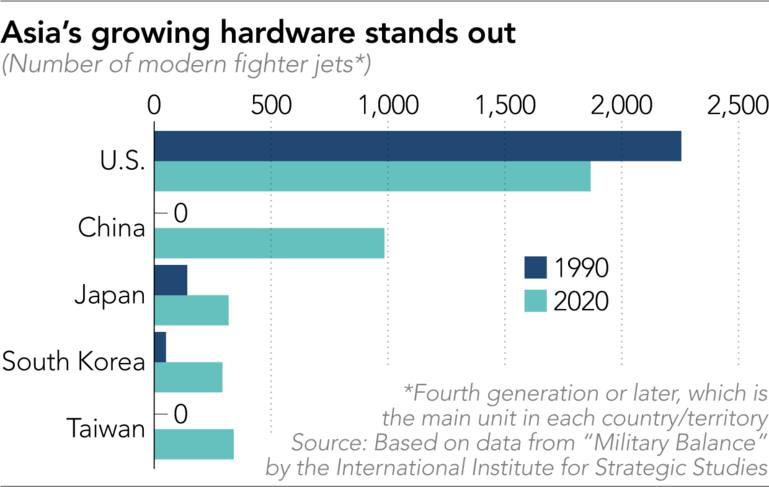 Checking China is beyond the capabilities of the U.S. Hence, its regional allies will be called on to shoulder more of the burden. The joint statement between Suga and Biden included Japan’s pledge to bolster its own national defense. Defense Minister Nobuo Kishi has floated the government’s intention of scrapping a long-standing 1% of GDP defense budget ceiling.

The changing focus of military power is of course affecting the Middle East. Increased armed clashes between Israel and the Palestinians are largely attributable to the priority shift of the Biden administration away from the Middle East toward China, said Koichi Nakagawa, a senior researcher at the Mitsubishi Research Institute.

Japan relies on the Middle East for 90% of oil imports. Nakagawa thus warned that “Japan will be more seriously affected than any other countries if the U.S. pulls out of the Middle East.”

Changes in the global military balance are posing new and tough challenges to Japan’s security.