TOKYO — The U.S. warning against travel to Japan on Monday showed that the Asian country still is lagging far behind other major economies in COVID-19 vaccinations and that it should quickly ramp up its inoculation drive.

White House Press Secretary Jen Psaki said on Tuesday that Washington continues to support the Tokyo Olympics, but that only “very limited categories of U.S. travelers” are planning on going to Japan for the games.

The message was not lost on Japanese Prime Minister Yoshihide Suga, who is pulling out all the stops to speed up inoculations. In addition to doctors and nurses, dentists have also been authorized to administer jabs, with emergency responders and clinical laboratory technicians soon to follow. The government may also let the nation’s 310,000 pharmacists give shots.

Suga wants to fully inoculate all of the nation’s 36 million seniors — people aged 65 or above — by the end of July.

But even if Suga’s goal is achieved — which experts say is extremely difficult — that would only cover 30% of the nation’s 124 million people, says Satoshi Hori, professor of infectious disease control at Juntendo University in Tokyo. “COVID is unlikely to be brought under control until the vaccination rate reaches 50%,” he said.

Suga also hopes to see one million shots a day by mid-June, up from 558,000 on Monday. That means it would take at least four months to fully inoculate half the nation. The Pfizer vaccine requires two shots in the space of three weeks, while Moderna’s requires two in four weeks. Researchers at Yokohama City University have reported that the Pfizer vaccine is more than 90% effective against COVID, but only after two shots, based on a survey of Japanese vaccine recipients.

Part of the reason for the slow rollout is the nation’s cautious approach toward vaccinations in general. Prospective recipients of the coronavirus must consult with a doctor before each shot and remain on-site 30 minutes after receiving it. If the patient exhibits adverse reactions such as anaphylaxis, the doctor immediately administers a dose of epinephrine. This is different from large vaccination centers in the U.S., where patients just get the jab and go on their way. “It will take till the end of the year to fully inoculate the majority of Japanese,” predicts Ko Ichihashi, professor at the Saitama Medical Center, Jichi Medical University.

In the meantime, there could be “one or two more COVID waves this year,” Ichihara warned. The current wave is just winding down after the government introduced a third state of emergency on April 25.

The U.S. and Europe are way ahead of Japan in vaccinations, which has resulted in a sharp drop in COVID-19 cases. Infection rates in Europe could fall below that of Japan unless the country speeds up vaccinations, Ichihashi said.

Already, the number of new cases per million in the U.K. has fallen below that of Japan, according to seven-day moving averages tracked by Our World in Data. 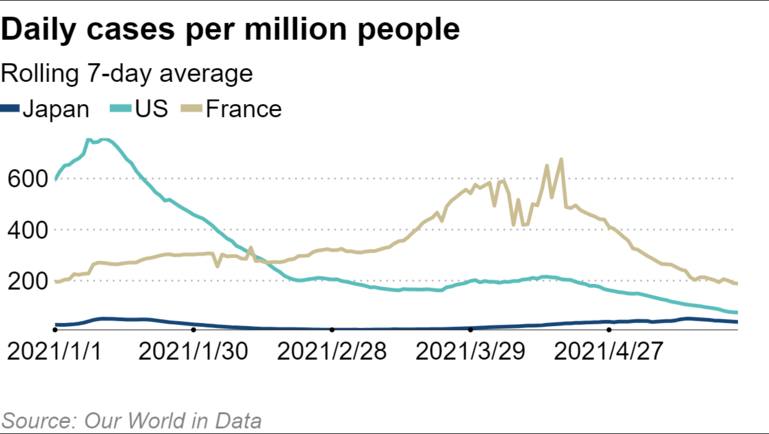 “As vaccinations progress in Europe and the number of new cases falls, countries there could issue similar travel advisories targeting Japan,” Ichihashi said.

The U.S. Centers for Diseases Control and Prevention said in its travel advisory that “even fully vaccinated travelers may be at risk for getting and spreading COVID-19 variants” while in Japan.

The timing of the alert may be tied to the Tokyo Olympics, which is due to start on July 23. “This may be intended to warn Americans about the risks of traveling to Japan for the games,” said Ichihashi.

COVID-19 cases in Japan are now dominated by the British variant, which is at least 30% more infectious than the conventional coronavirus, according to Japanese researchers.

Researchers at Yokohama City University reported on May 12 that the Pfizer vaccine is 90% effective against new COVID variants.

The U.S. alert suggests that the CDC thinks the vaccine may not be able to protect against new variants if people are heavily exposed to them. The CDC, in response to a query from Nikkei, did not elaborate on why fully vaccinated people are still at risk, other than saying that Japan met the criteria for the alert, citing incidence rates or infection numbers.

Other countries may follow the U.S. warning against travel to Japan. But these moves are unlikely to result in major economic disruptions, the two Japanese experts said, as most business dealings are already being conducted remotely.