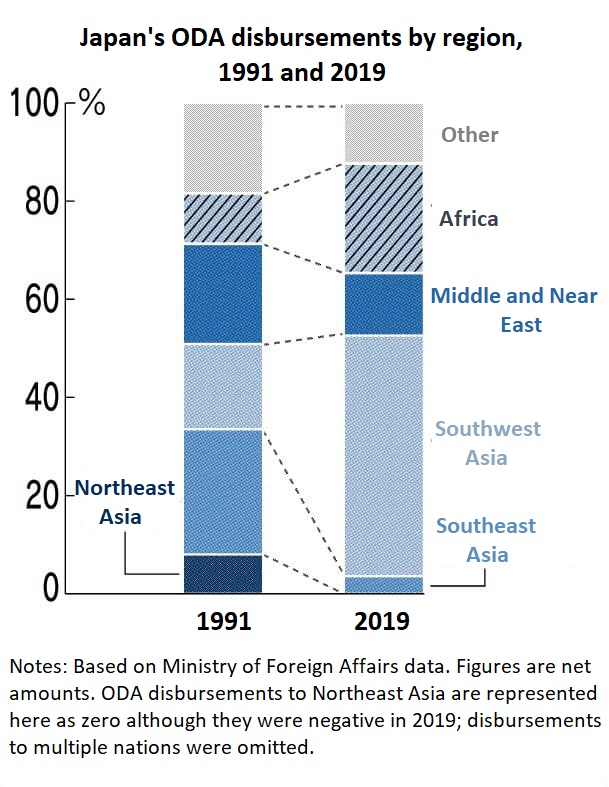 TOKYO — Japan doled out more foreign aid than other countries in the 1990s but now ranks only fifth, partly on the ending of assistance to China.

Official development assistance by Japan totaled $13.6 billion in 2020, up 17% on the year. But its share of the overall amount provided by members of the Development Assistance Committee of the Organization for Economic Cooperation and Development shrank to 8% from the 1990 figure of 17%.

These net figures — aid provided minus lending repaid — are based on data from the DAC.

Japan was the leading provider in the 1990s but has gradually slipped in the rankings. The U.S. was the top provider in 2020 at $35.1 billion, with Germany in second place.

The U.S. boosted its aid following the terrorist attacks of Sept. 11, 2001, aiming to support development in emerging countries to keep poverty from driving violence. European nations also ramped up aid during that decade.

Japan has increased its aid over the past five years, with the figure up roughly 50% from the $9.2 billion of 2015. This is thanks to a cabinet decision that year to change policy to make it easier to provide aid to countries whose economies have outgrown eligibility conditions.

China used to be the largest beneficiary of Japan’s largesse, with aid starting in 1979. The support, which went mainly to infrastructure projects at first, helped build the foundations of Chinese economic growth. But opposition to Japanese aid grew stronger in China as bilateral ties cooled for various reasons, including differences over wartime history.

Japan’s aid to China began to shrink after peaking in 2000, and Japan stopped offering new yen loans in 2007. In 2018, then-Japanese Prime Minister Shinzo Abe told Chinese Premier Li Keqiang during a visit to Beijing that Japan would end ODA to China.

Japan’s aid to Northeast Asia, including China, accounted for 8% of Japan’s bilateral ODA in 1991, according to the Ministry of Foreign Affairs. But net aid is negative now because amounts recovered from past loans exceed assistance provided.

India was the top recipient of Japanese aid in 2019, with Bangladesh and Myanmar as the runners-up. India has adopted Japan’s shinkansen bullet train technology for a high-speed-rail line under construction. Bangladesh is set to receive yen loans to build transportation infrastructure.

Japanese Foreign Minister Toshimitsu Motegi said May 5 that Japan was prepared to provide India with a grant of up to $50 million to fight COVID-19. Behind this move is a hope that India will become a key partner as Japan squares off against China.