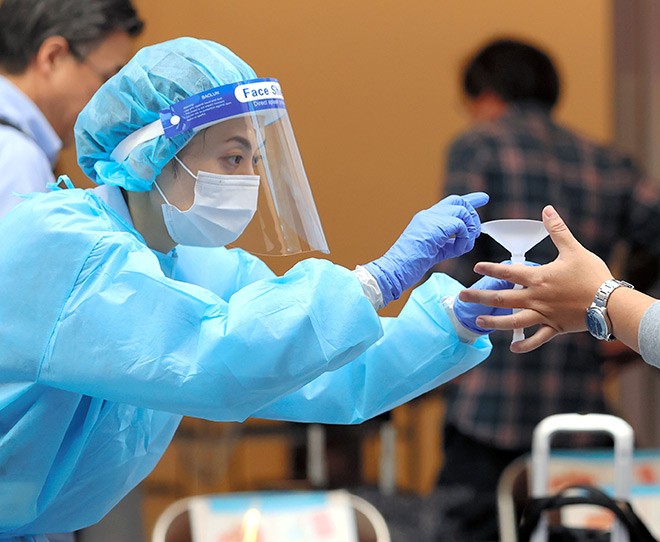 A quarantine officer receives saliva samples from an entrant to conduct an antigen test for the novel coronavirus at Narita Airport on May 23. (Yasuhiro Sugimoto)

Some health experts fear that a coronavirus variant first detected in India and potentially more contagious than one that devastated Britain is slowly gaining a foothold in Japan.

The government has been forced to ramp up efforts to keep the virus from India at bay through tightened quarantine measures at airports.

It also is trying to slow its spread by early detection of those infected with widespread PCR tests that can detect the L452R mutation in the spike protein found in the India variant.

The health ministry announced on May 26 that 29 people have been confirmed infected with the variant from India, known as B.1.617, in Japan as of May 24.

The number rose to 160 as of May 17 for people who tested positive during checks at airports.

Tests conducted by the Tokyo metropolitan government showed that the India variant was detected in 14 people as of May 25.

Of these, nine became infected after having close contact with people who had traveled overseas, indicating that preventing the virus’s inroad at airports has its limits.

Tomoya Saito, head of the Center for Emergency Preparedness and Response for the National Institute of Infectious Diseases (NIID), said the variant may be more widespread than believed.

“Given the ratio of positive cases found at airports, the India variant may have made inroads inside Japan in significantly larger numbers than the strain from Britain did” late last year, he said.

What is also alarming are reports on cases of those who tested positive for the variant from India despite having not traveled overseas nor had contact with anyone infected.

On May 14, the Tokyo Medical and Dental University announced that a patient at its hospital was confirmed with the variant from India.

The infected patient is a man in his 40s with an underlying condition. He had no record of traveling abroad nor exposure to anyone infected with the virus from India.

“The patient’s case can be interpreted that community infections with that particular variant are widening,” Hiroaki Takeuchi, an associate professor of virology at the university, said, adding that the confirmed cases so far may not necessarily reflect the extent of infections with the Indian strain of the virus in each region.

Yoshihiro Takayama, a doctor at Okinawa Prefectural Chubu Hospital who leads the prefecture’s coronavirus response, fears the spread of the variant from India would exacerbate Japan’s battle against the virus.

The variant from India is estimated to be more contagious than the strain that was first identified in Britain, a variant that is itself assessed around 30 percent more transmissible than the initial novel coronavirus by the NIID.

“If the Indian version swept through the nation, it would be a lot more devastating to the country,” Takayama said.

The southernmost prefecture has been placed under a state of emergency. It reported the nation’s highest new cases per 100,000 people over the most recent week on May 26, with 92.88.

The prefecture has been pounded by variants that have a mutation known as N501Y, which is most notably seen in the British version, like elsewhere in Japan.

In Britain, the Scientific Advisory Group of Emergency, an expert group, suggested in its report on May 13 that it is “a realistic possibly” that the India variant could be up to 50 percent more contagious than the Britain variant.

Although Britain’s Public Health of England did not give specific numbers, it also suggested that the India variant is substantially more transmissible than the Britain variant.

Scientists raised concerns about a possible drop in antibody levels created among people infected with the initial form of the coronavirus.

They point to a possibility that protection provided by a vaccine that was developed based on the original virus could decline.

But some studies showed that people who are fully inoculated with the Pfizer-BioNTech vaccine are protected against the India virus as well.

While the World Health Organization added the virus from India to the list of “variants of concern” to call for caution, the NIID also took a similar step by naming it one of the variants of concern. Variants from Britain, South Africa, Brazil and the Philippines are also on the list.

The health ministry is set to conduct a large-scale surveillance by commissioning PCR tests to identify the variant from India to private-sector labs to detect patients and isolate them at an early stage.

(This story was written by Kenta Noguchi and Senior Staff Writer Tokiko Tsuji.)