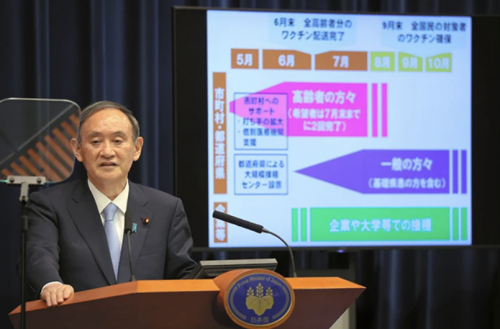 Prime Minister Yoshihide Suga announces May 28 that the state of emergency will be extended until June 20 for nine prefectures. (The Asahi Shimbun)

Current levels of infection and the strain imposed on the health care system may justify the government’s decision to extend the COVID-19 state of emergency.

But its seemingly haphazard response to the novel coronavirus pandemic, which does not appear to be based on a clear vision, will do little to motivate society to rally even further to overcome the crisis.

The government decided May 28 to maintain the state of emergency for nine prefectures until June 20.

When it declared the latest state of emergency, the government said it was intended as a short-term, intensive effort to curb infections during the Golden Week holidays from late April to early May. But it failed to produce the hoped-for result, and has now been extended twice by 20 days each.

Tokyo has been under various COVID-19 restrictions for much of this year.

The capital has been either under a state of emergency or covered by “man-en boshi” quasi-emergency anti-virus measures during the five months except for about 30 days in early January and from late March through early April.

There are signs the populace has become weary of voluntary restrictions and accustomed to a state of emergency. It will be vital for the government to offer even more detailed explanations about its policy and provide swift and tailored support to businesses that are affected.

Otherwise, it cannot hope to win public support for its requests for shorter business hours, closures and voluntary restrictions on outings.

The Tokyo metropolitan government has taken its own approach, asking movie theaters and museums to close while allowing theaters and amusement parks to open. The reasons behind these instructions remain vague, provoking a backlash from the operators affected.

The central and local governments need to maintain close and effective two-way communication to prevent confusion of this kind.

Health experts have found it now takes longer for infection levels to take a downturn because the new, more infectious variant first found in Britain has spread.

They are concerned the situation will worsen due to the possible emergence of the Indian variant, which is said to be even more contagious, as the main source of infections.

It is hard to believe the state of emergency will bring down infections sufficiently by the June 20 deadline to the extent that it will prevent a significant rebound after the curbs are lifted.

The Indian variant has already been discovered in patients who had not traveled overseas recently. Clusters of infections involving this variant have also occurred

The government must not repeat the mistake that allowed the British variant to spread rapidly. There is an urgent need to concentrate limited resources on keeping a close watch on the situation and containing the Indian variant.

Medical data about patients infected with the variant must be closely monitored to determine whether it leads to symptoms that are different or more serious.

Vaccination rollouts are crucial to vanquishing the pandemic, and the number of inoculated elderly people has grown. Vaccination tickets for people younger than 65 are likely to start being sent out in mid-June.

As more people become inoculated, the government should present a clear strategy based on solid science on its plan to control and contain the outbreak.

The Suga administration should also recognize that its insistence on going ahead with the Tokyo Olympics is breeding public distrust of the central and Tokyo governments’ responses to the pandemic.

A recent Asahi Shimbun editorial urged the prime minister to cancel the Games this summer.

At a May 28 news conference, however, Suga did not address whether the Olympics could be held even if the capital is under a state of emergency. Instead, he only described the infection control measures during the events that had already been announced.

Suga’s attitude only undermines public confidence in his pledge to ensure security and safety for the events.