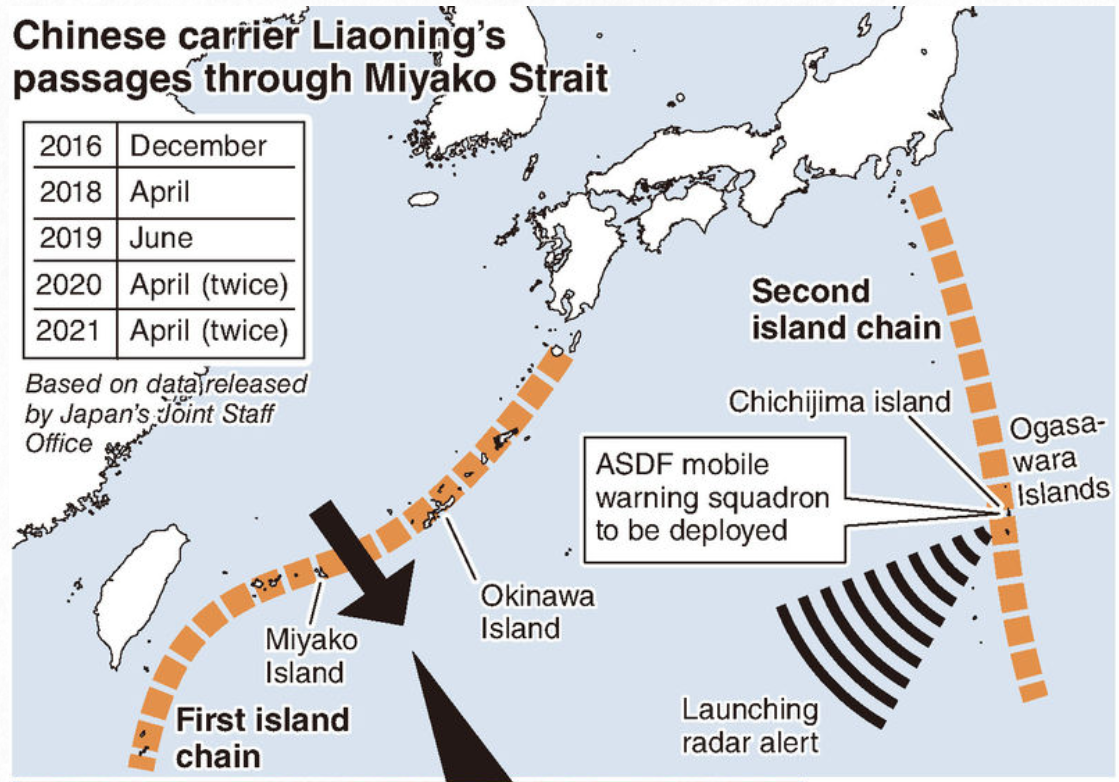 China’s repeated advances of its carrier fleet into the Pacific Ocean are spurring the Defense Ministry to deploy the Air Self-Defense Force’s mobile radar unit to the Ogasawara Islands to watch for violations of Japanese airspace.

The ministry is rushing to establish a monitoring system for Japan’s remote Pacific islands because this area is said to be a blind spot in the nation’s air defense surveillance.

For the time being, about 10 personnel will be stationed in shifts to monitor the area, with Chichijima island one of the candidate sites for the deployment.

Next spring or later, the ministry will begin coordination with local communities in earnest. In the future, it is also envisioned that stationary radar will be installed to strengthen the monitoring system.

The Self-Defense Forces monitor the airspace around the Japanese archipelago through 28 radar sites, and the ASDF’s mobile warning squadrons supplement the radar sites in case of malfunction by using vehicle-mounted radars.

Japan has been strengthening its surveillance network in the Nansei Islands, which are deemed to be a gateway to the broader Pacific Ocean for China, in response to the increasing Chinese military presence in the Pacific. In 2016, the SDF established a coastal observation unit on Yonaguni Island, Okinawa Prefecture.

On the other hand, the Ogasawara Islands and other Japanese Pacific islands are not under a constant surveillance system, as the SDF has no air defense radar there.

According to the Defense Ministry’s Joint Staff Office, the Chinese navy’s aircraft carrier Liaoning has deployed to the Pacific Ocean through the Miyako Strait, between Okinawa Island and Miyako Island, a total of seven times since December 2016. The carrier had two confirmed passages each in 2020 and 2021.

The Japanese government believes that China will expand the range of activities of its carrier fleet to the area near the line that runs through the Ogasawara Islands and Guam. China has positioned the line as the “second island chain,” one of its defensive lines against U.S. military operations.

Since its commissioning, the Liaoning has also been conducting drills of its onboard aircraft. In April this year, it was confirmed that it launched an early warning helicopter around Miyako Island.

Flights over the Miyako Strait by Chinese military aircraft have also become more frequent, totaling 61 times since July 2013, when information on the flights in the area was released for the first time.

The airspace in the Pacific Ocean is vast, and if China further increases the military deployment there, there will be a growing threat of airspace violations.

“In order to protect the Tokyo metropolitan area from carrier-based aircraft in the event of an emergency, it is urgent to establish a system for the early acquisition of targets by radar in the airspace around Ogasawara,” a senior ASDF official said.