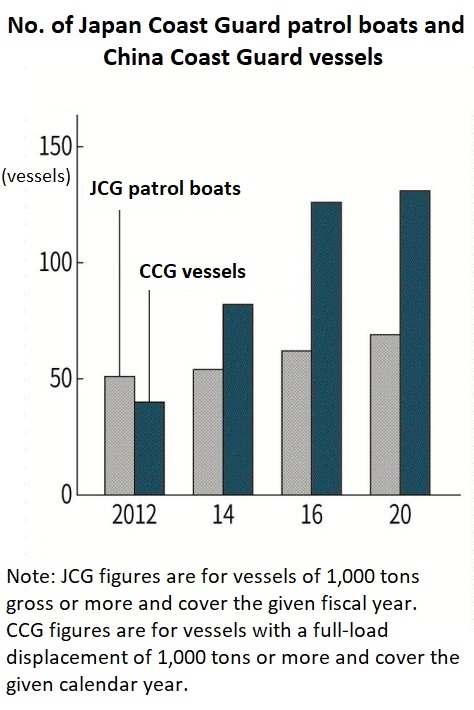 Organizations that ensure safety and security at sea, such as the Japan Coast Guard (JCG), are called maritime law enforcement agencies. China’s agency is the China Coast Guard (CCG), and the U.S. Coast Guard is America’s agency. China is building up its Coast Guard’s capabilities, more than tripling the number of vessels in its fleet from 2012 to 2020.

China created the CCG in 2013 by consolidating units that had originally been placed in such ministries as the Ministry of Public Security, the Ministry of Agriculture, and the State Oceanic Administration. According to the JCG, in 2012, before the CCG was launched, China’s maritime law enforcement agencies had 40 vessels (vessels with a full-load displacement of 1,000 tons or more).

That same fiscal year, the Japan’s Coast Guard had a fleet of 51 patrol vessels (of 1,000 tons gross or more). In other words, Japan had more maritime law enforcement ships than China.

After reorganizing and launching the CCG, China increased the fleet to 82 in 2014 and to 131 in 2020. China now has almost twice as many vessels as the JCG. Some of China’s ships are large vessels in the 10,000-ton class and equipped with cannons.

Japan is wary of the increase in the CCG fleet because CCG vessels are repeatedly intruding into Japan’s territorial waters around the Senkaku Islands in Okinawa Prefecture. The number of intrusions increased sharply after a collision between JCG patrol boats and a Chinese fishing boat in 2010. 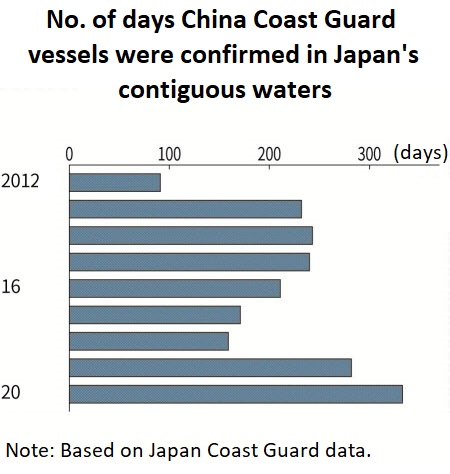 Chinese public vessels were confirmed to be in Japan’s contiguous zone for 333 days in 2020, a record high. Chinese ships are sailing near the Senkakus virtually every day, and in many cases, they sail in groups of four. Not only has the number of ships and the frequency of intrusions increased, but it is said that the ships don’t leave the waters near the Senkakus even in stormy weather because the ships are so large.

The JCG is strengthening its framework to respond to the CCG. In fiscal 2020, Japan increased its fleet to 69 vessels, a 35% increase from fiscal 2012. The government and the ruling parties plan to continue expanding the JCG, but they are not keeping pace with China’s expansion.

The Japanese government is increasingly wary of coordinated actions between the CCG and the Chinese Navy. Originally, the CCG was under the State Council, an administrative organization, but in 2018 it was placed under the Chinese People’s Armed Police Force (PAP). In February 2021, the new China Coast Guard Law came into force, giving the CCG the status of a paramilitary organization.

The Self-Defense Forces Act contains provisions that allow for the JCG to be controlled by the defense minister, while the Japan Coast Guard Act imposes restrictions on the JCG’s activities, noting that “nothing in this Act shall be construed as authorizing the Japan Coast Guard or its personnel to perform the functions of a military force.”

In the Senkaku Islands, there is the possibility of a “gray zone” situation, which does not fall under the category of peacetime or contingency.

In April, the Liberal Democratic Party submitted a proposal to Prime Minister Suga Yoshihide calling for stronger cooperation between the JCG and the Maritime Self-Defense Force. There are also concerns that if the SDF were to be used it could cause China to mobilize its navy.