These six letters were the dramatic conclusion of a five-page document from U.S. Customs and Border Protection (CBP). The person in charge at Fast Retailing ([the Japanese parent company of] Uniqlo) must have been very dismayed by the notification.

The import ban imposed in January by the CBP on some Uniqlo products was revealed on May 19. The products were blocked from entering the United States on suspicion they were made using cotton produced by the Xinjiang Production and Construction Corps (XPCC), an organization under the control of the Chinese Communist Party. Cotton and cotton products connected to the XPCC have been barred entry to the United States since last November over suspicion of the use of forced labor by ethnic minorities in the Xinjiang Uyghur Autonomous Region (XUAR).

Fast Retailing had appealed the U.S. import ban, claiming that “the products have no connection to forced labor.” In the document sent to Fast Retailing, the U.S. authorities denied the appeal, citing insufficient evidence.

U.S. sales make up only a few percent of Fast Retailing’s total, and only a few of Uniqlo’s products were hit with the ban, so the blocked shipment is expected to have a minimal direct impact on the company’s earnings. It is hard to predict, however, how wide ranging the repercussions may be.

If consumers in the West and in Japan come to have the perception that “Uniqlo products are made with inhumane materials,” it would be a significant blow to the company’s brand image. And yet, when such leading Western brands as Adidas (Germany), Nike (United States), and H&M (Sweden) announced that they “do not procure Xinjiang cotton,” they were hit with a tremendous backlash in China. Seeing that, there is also reason to hesitate setting off that reaction.

At a news conference in April, Fast Retailing Chairman, President, and CEO Yanai Tadashi declined to comment when he was asked about the company’s use of Xinjiang cotton. The fact that Yanai did not voluntarily disclose that products were confiscated in January at the U.S. border but simply refused to comment leaves very large questions regarding the company’s disclosure of risk information to its shareholders.

U.S. detention orders (withhold release orders) against China are not a source of anxiety just for Fast Retailing. Many Japanese companies need to see this as “their own” problem.

What does the CBP’s ban on Uniqlo products really mean? According to Dr. James Leibold, a Senior Fellow at the Australian Strategic Policy Institute (ASPI) who is familiar with the issue of forced labor in Xinjiang: “The U.S. authorities are sending a message to Japanese apparel brands not just to Uniqlo. The message is that Japanese brands are not taking the issue of Xinjiang forced labor and human rights infringements seriously enough.”

As mentioned earlier, a good number of major Western brands have clearly expressed concern about Xinjiang issues. Compared with such companies, Japanese brands are being looked at askance. Asks Dr. Leibold: “Have Japanese brands adequately expressed an intent to decouple from the Xinjiang region and Xinjiang cotton?”

In other words, it is thought that the U.S. authorities scapegoated Uniqlo products as a message to Japan that they expect its other brand companies to see the ban as relating to them as well. 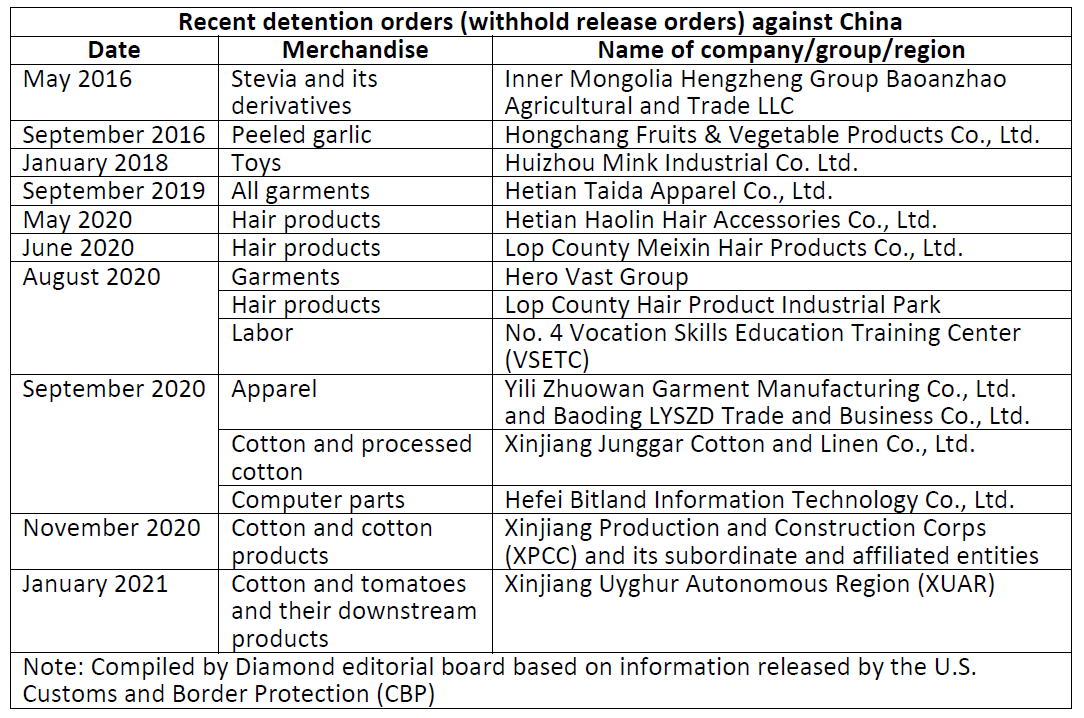 The ban also affects industries unrelated to apparel. The chart lists “detention orders (withhold release orders)” against Chinese companies, groups, and regions compiled based on CBP information. The merchandise of the companies, groups, and regions listed is detained and refused entry at all CBP checkpoints in the United States. The 14 orders in the chart were issued in or after 2016 and are still in effect today. The majority are related to Xinjiang human rights issues.

As is evident from the chart, computer parts and tomato products are also targeted. It is worth noting that even labor is listed. Past ASPI surveys point out that Xinjiang ethnic minorities are sent throughout China to work as laborers and are made to engage in forced labor. If this is the case, then all companies that manufacture products in China potentially face having their products denied entry into the United States. Is your company at risk? Best to conduct a thorough investigation.