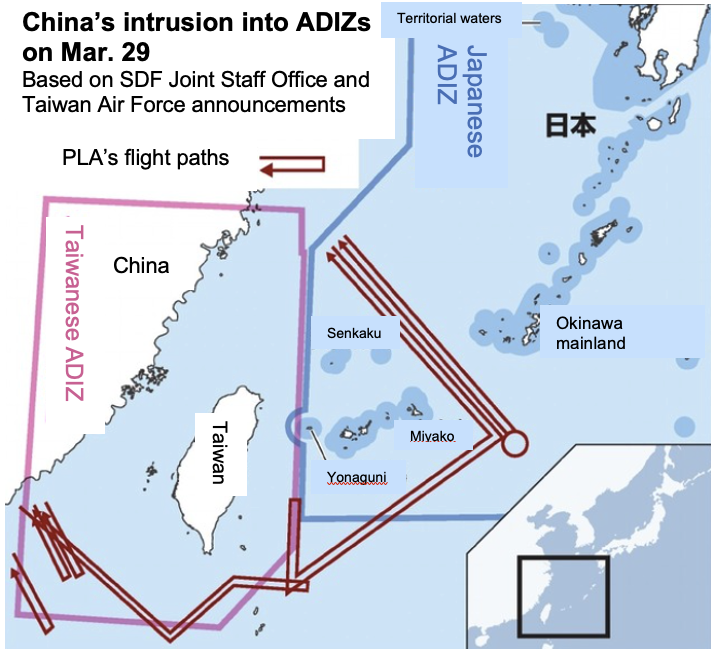 The alarm to scramble sounded throughout hangars in the ASDF’s Naha Air Base, and F-15 fighter jets in pairs swiftly became airborne.

The aircraft were a Chinese surveillance plane and a patrol plane. They flew over the area between mainland Okinawa and Miyakojima before the patrol plane left the area to fly over the Pacific and circled around to the east side of Taiwan. More than ten ASDF F-15s pursued the two Chinese aircraft. Later on the same day, the Joint Staff Office published a map indicating the flight paths of the Chinese aircraft.

However, the map only described one facet of Chinese aircraft activity that day.

At around the same time as the two aircraft entered the Japanese ADIZ, a total of ten planes belonging to the People’s Liberation Army, including four “Jian-16” fighter-bombers, as well as patrol planes and fighter planes, entered Taiwan’s ADIZ. The patrol planes repeatedly crossed the ADIZ, flying as far as an area southeast of Taiwan before reversing direction.

Analysis on maps published respectively by the Joint Staff Office and Taiwan’s Air Force reveal that the paths of the Chinese military aircraft enclosed Taiwan from three directions.

The Global Times, which is affiliated with the Chinese Communist Party’s organ, the People’s Daily, ran an article by a military expert who explained: “The purpose of the exercise was to improve the battle-preparedness of the Chinese military by making training more complex and realistic. The military took into account possible intervention from Japan and the U.S.” He wrote that it was a two-front exercise whose aim was to warn Taiwan and prevent Japan and the U.S. from intervening.

It is widely believed that the Chinese military is attempting to prevent Taiwan and the U.S. from joining forces. On Mar. 25 the two countries signed a memorandum to strengthen maritime patrols and intelligence sharing. On Mar. 28, when the President of Palau visited Taiwan, the U.S. ambassador to Palau accompanied him to Taiwan. (Palau maintains diplomatic relations with Taiwan.) Japan and the U.S. confirmed cooperation to ensure the “peace and stability of the Taiwan Strait” at the 2-plus-2 ministerial held on Mar. 16.

Meanwhile, Taiwan is finding it increasingly more difficult to respond to China’s aggression.

“Our military operations are increasingly affected [by the intrusions]. The (Chinese) aircraft are monitored mostly by land-based missile units,” said Vice Defense Minister Chang Che-ping at the Taiwanese parliament when asked about the situation, admitting that the Taiwanese government has shifted its response strategy from scrambling a large number of fighter jets to monitoring from the ground.

Taiwan’s Ministry of National Defense has been disclosing the number of Chinese aircraft intruding into Taiwan’s ADIZ since September 2020. The number was 150 from mid-September to the end of December. This year the number rose sharply, totaling 280 as of the end of April. In 2020, Taiwan spent approximately 9% of its national defense budget (about 120 billion yen) on scrambles. The response to the Chinese intrusions has exhausted its military personnel.

What is China trying to accomplish by its ADIZ intrusions? Former ASDF Lieutenant General Oue Sadamasa, who led the Defense Plans and Policy Department at the Joint Staff Office, explains: “Like the situation in the Senkaku Islands, it is common practice for China to first take an actions that are “exceptions” and gradually establish a new normal, thus creating an environment for proceeding to the next step.” He pointed out, “Meanwhile, China is putting an extra burden on the other side and conducting a war of attrition. China has already entered the stage of ‘gray-zone’ operations (where the situation is neither normal nor a contingency).”