TOKYO — Japanese mobile carrier SoftBank Corp. has formed a tie-up with U.S. startup Skylo Technologies to provide satellite communication services for internet-connected commercial devices at a cost of only 10% of competing rates.

SoftBank struck its alliance with Skylo late last month, after parent company SoftBank Group led a $103 million funding round for the startup this January, aiming to launch an affordable network in Japan as early as next year. Boeing is also an investor in the American company.

“The costs have caused a bottleneck” in promoting high-speed satellite communication, said a SoftBank source. “We’ll create an environment where even a small fishing boat, for example, can easily use” such services.

The network will also serve areas that have insufficient coverage by base stations located on the ground.

The network has a wide-range of commercial uses, from locating ships to capturing temperature data on farms and monitor conditions of construction equipment. SoftBank plans to leverage the partnership with Skylo to develop the global market.

Skylo, formed in 2017, provides communication services for IoT devices using satellites in geostationary orbit at altitudes of 36,000 km. However, the startup does not own any satellites. Instead, it leases capacity from satellite operators.

Skylo has patented an antenna technology that relays satellite signals in frequencies used in IoT applications. Skylo says it can provide efficient and timely data transfer even if a client connects to a large volume of devices. The startup has received funding from Boeing as well.

Fees to use geosynchronous communications satellites run around hundreds of dollars a month for 1 megabit-per-second speeds, according to SoftBank Corp., which says this service can lower costs to a fraction of that. 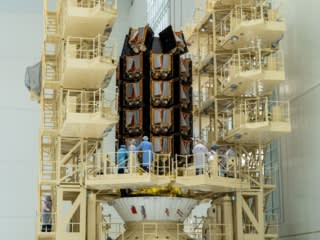 Separately from Skylo, SoftBank plans to roll out next year or later a telecom service that uses low-orbit satellites at altitudes of 1,200 km. For this project, the carrier will collaborate with OneWeb, a British satellite startup also backed by SoftBank Group.

Low-orbit satellites are capable of providing connectivity speeds on par with 4G communication. SoftBank Corp. aims to upgrade speeds to 5G in phases.

HAPSMobile, a SoftBank Corp. subsidiary headquartered in Tokyo, is developing unmanned aerial communication vehicles that hover in the stratosphere. HAPSMobile is a collaborator on a project with Loon, a unit under Google parent Alphabet, that is working on frameworks for the aerial cell towers. Although the communication units fly at low altitudes, the coverage area spans 200 km in diameter.