Editorial: Decisive protest a must on Okinawa U.S. helicopter incident 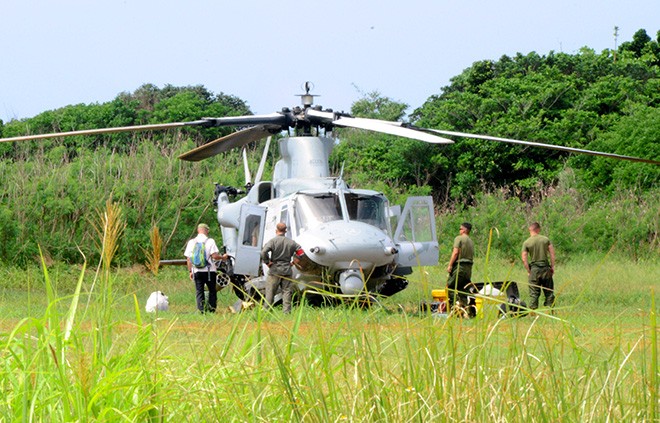 The U.S. military helicopter that made an emergency landing on Tsukenjima island in Uruma, Okinawa Prefecture. Photo taken June 4 (The Asahi Shimbun)

The prefectural government in Okinawa summoned the heads of local bureaus of the defense and foreign ministries June 8 to lodge a protest over the emergency landing of a U.S. military helicopter in a field on Tsukenjima island, part of the city of Uruma.

Some people may regard an incident of this nature as not such a big deal.

But imagine an 18-meter-long chopper weighing more than 5 tons coming down with thunderous roar just 120 meters from your home. You would be utterly terrified.

The absence of any serious damage is no justification whatsoever for taking this incident lightly.

The helicopter, based at the U.S. Marine Corps Air Station Futenma, made a precautionary landing around 11 p.m. on June 2 after a warning light came on, officials said.

There are many things that do not sit right with us. For one, the U.S. military explained that the chopper was engaged in a training exercise at the time.

In 1996, Tokyo and Washington agreed to restrict U.S. military flights from 10 p.m. through 6 a.m. to lighten Okinawa’s burden. This means the helicopter was in violation of this noise-prevention agreement.

In reality, exceptions are made for flights that are deemed “operationally necessary” by the U.S. military, effectively enabling the U.S. side to enforce the agreement at its discretion.

Some communities around the Futenma base register more than 30 cases of late-night-to-early-morning noise per month on average.

The agreement must not be allowed to remain a dead letter anymore.

We must also note that the Japanese government’s handling of this incident is anything but acceptable.

A U.S. military helicopter crashed in Uruma in 2015, and choppers from the U.S. military also made emergency landings in the city in 2017 and 2018.

The mayor of Uruma again asked Tokyo to ensure that low-altitude flights over residential areas and night-time training are halted following the latest emergency landing.

But Defense Minister Nobuo Kishi and Chief Cabinet Secretary Katsunobu Kato responded with mere abstractions, stating, for example, that they will “continue to call for thorough safety enforcement.”

Instead, the central government must lodge a stern protest and demand that Washington suspend flights of the aircraft of the same model at least until the cause of the incident is understood and preventive measures are drawn up.

The government owes this to the Japanese people, whose lives and assets it is duty-bound to protect.

“We will do everything we can to alleviate Okinawa’s burden” has been the government’s mantra since the previous administration was in power. Are we supposed to understand that these words were never meant to be taken seriously?

However, permission must be sought from the U.S. side to approach the aircraft involved in an accident or to examine it on site.

The government must further improve the guidelines and the way they are implemented after confirming the extent to which the Japanese side has been able to examine and investigate accidents.

U.S. military aircraft do not fly only over Okinawa Prefecture. Flights at abnormally low altitudes have been recently witnessed throughout Japan, and people’s fears are growing.

The National Governors’ Association is demanding a fundamental review of the Japan-U.S. Status of Forces Agreement, which effectively allows U.S. forces in Japan to perform such dangerous maneuvers. But the central government is not budging.

The latest incident was not just someone else’s problem. On this understanding, we will closely watch how the government handles the issue in the days ahead.