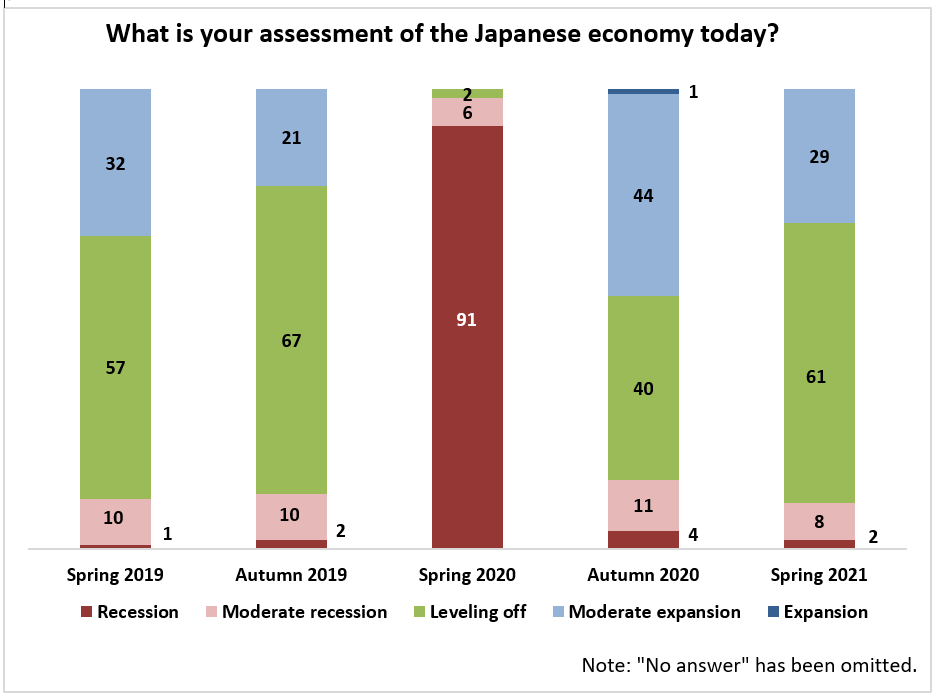 The biyearly survey was conducted of 100 major Japanese companies nationwide from May 24–June 4, 2021.

After hitting a low in the June 2020 poll that was on a par with that after the collapse of Lehman Brothers, CEOs’ assessment of the domestic economy turned up in the November 2020 poll. In the recent poll, however, no companies said the domestic economy is expanding and only 29 said it is moderately expanding. Moreover, 8 companies said that it is in a moderate recession and 2 said it is in a recession.

Asked for the reasons for their assessment of the domestic economy (up to two answers permitted), 72 companies said “personal consumption,” making it the most frequently given answer. Meiji Holdings President Kawamura Kazuo comments, “Compared to last year’s state-of-emergency (SOE) declaration, the recent SOE has been prolonged and consumption has turned down dramatically.”

In contrast, 8 companies said that the global economy is expanding, up by 6 from the previous poll, and 68 said the economy is in a moderate expansion, up by 28. Kubota President Kitao Yuichi comments, “We are seeing positive signs as the U.S. and Chinese economies pick up and economic activities resume thanks to governments’ economic countermeasures and the rollout of COVID-19 vaccines.”