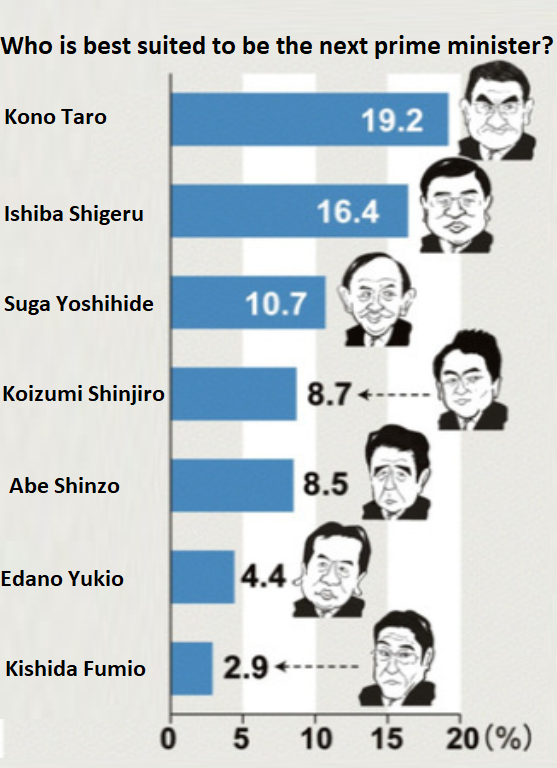 The joint public opinion poll conducted by the Sankei Shimbun and Fuji News Network (FNN) on June 19–20 probed views on which politician would be most suitable to serve as the next prime minister. Some 19.2% of pollees said that they support Minister in charge of Administrative Reform Kono Taro, giving him the top ranking. He also garnered the most support in the poll taken on Feb. 20–21, the last poll in which this same question was asked. Former Liberal Democratic Party (LDP) Secretary-General Ishiba Shigeru garnered the support of 16.4% of respondents, making him the second-most frequently selected politician.

Prime Minister Suga Yoshihide garnered support from 10.7% of all respondents, up by 6.1 percentage points from the February poll. This lifted him to third place. Minister of the Environment Koizumi Shinjiro gained the support of 8.7% of pollees, down by 4.5 points, dropping him to fourth place. In fifth place was former Prime Minister Abe Shinzo at 8.5%. In sixth place was Edano Yukio, leader of the Constitutional Democratic Party of Japan, at 4.4%, and in seventh was former LDP Policy Research Council Chairman Kishida Fumio at 2.9%.

Kono also was the most frequently selected politician among LDP supporters at 20.4%, down by 7.3 points from the February poll. In heated pursuit was Prime Minister Suga at 19.6%, up 12.1 points. Koizumi garnered support from 9.8% of LDP supporters, down by 5.1 points. He was overtaken in the rankings by both Ishiba and Abe, who each gained the support of about 15% of LDP supporters. Noteworthy was the rebound by Prime Minister Suga, who saw increases across all age groups, except for those in their 30s.

[Polling methodology: A total of 1,129 men and women, aged 18 and over, across the nation were surveyed. The nation was divided into 11 blocs corresponding to the Lower House proportional representation districts. The survey was conducted by placing telephone calls on a random digit dialing (RDD) basis until the calculated number of responses obtained from each bloc corresponded to that bloc’s relative population. A weighted adjustment was then performed for such variables as gender and age. Calls were placed to both landline and mobile numbers in the ratio of 4:6. The following follow-up question was posed to respondents who gave an unclear answer to the question about Cabinet support: “Which is closer to your view?” The responses to the follow-up questions were added to the responses to the initial question. The survey was conducted on June 19–20, 2021.]