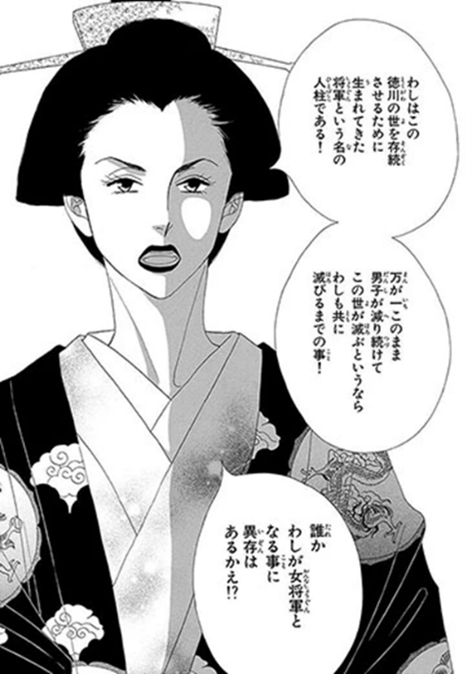 Amid the slow progress of Japan’s efforts to achieve gender equality, Japanese manga artist Yoshinaga Fumi imagined what Japanese society might have been like if women had filled traditionally male roles in the Edo Period (1603–1868). The idea inspired her to create the award-winning manga series Ooku: The Inner Chambers. The term ooku (great interior) refers to the women’s quarters at Edo Castle that were administered by and for upper-class shogunal women, including the wife and concubines of the shogun, and their hundreds of attendants. It functioned as an institution to maintain the bloodline of the Tokugawa family. In order to develop her idea, the manga artist created an alternative world where an unknown disease with an 80% mortality rate that only affects young men has caused a massive reduction in the male population, putting the patrilineal Tokugawa shogunate on the verge of extinction. With women holding all of the key political positions, including shogun, and men being their consorts, the social structure in Japan becomes completely matriarchal.

The series, which was launched in August 2004 and concluded in February 2021, won the Cultural Affairs Agency’s Excellence Prize in 2006 and was adapted into two action films and a TV drama series. The manga also won in 2009 the Otherwise Award, formerly known as the James Tiptree Jr. Award, an annual literary prize for works of science fiction or fantasy that expand or explore understanding of gender. 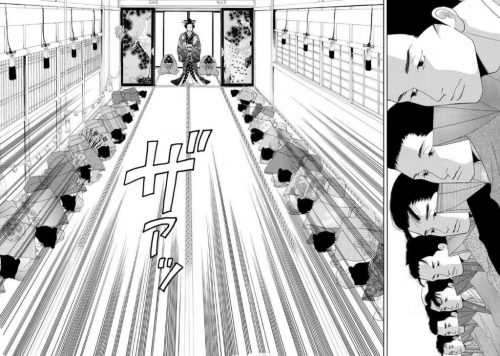 Some critics argue that the manga series was prophetic because the alternative world in which an infectious disease overturns the existing social system eerily resembles today’s reality when COVID-19 is rocking Japanese society. Critics also argue that the manga series has contemporary implications for gender roles among other things because Yoshinaga overturns the traditional perception of male superiority in governing by portraying women’s ability to manage the Tokugawa regime.

Ironically, the shogunate under the control of women in the story comes to an end as a result of female leaders’ developing a vaccine. The male population recovers after the deadly disease is eradicated by a vaccine developed by female scientists who learn Western medical technology. In reality, Japan adopted an isolationist foreign policy called sakoku for more than 200 years by severely limiting the nation’s relations and trade with other countries. However, Japan achieved scientific progress during this period by studying Western scientific, technical, and medical innovations through Dutch resources that were available at an isolated trading post in Nagasaki.

In the story, the Tokugawa regime run by women is destroyed, the Meiji government forms, and power is restored to the Emperor. The new government, which promotes the modernization of Japan’s political, economic, and social systems, insists that the “shameful” history of female control of the nation be rewritten and never disclosed. The government worries that the Western powers, who developed advanced technology under governments led by men, will look down on Japan for adopting an unusual governing system. 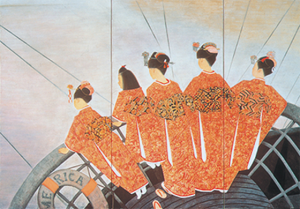 One critic asserts that modern Japan is still haunted by a perception of male supremacy in the Meiji Era. At the end of the story, Yoshinaga offers hope for the future by describing a talented young woman, presumably Tsuda Umeko, a pioneer in women’s education during the Meiji Era, on a voyage to the United States to learn English and the liberal arts. In an interview with Mainichi (4/22), Yoshinaga expressed the hope that her story will convey a positive message to readers about women leading the nation.