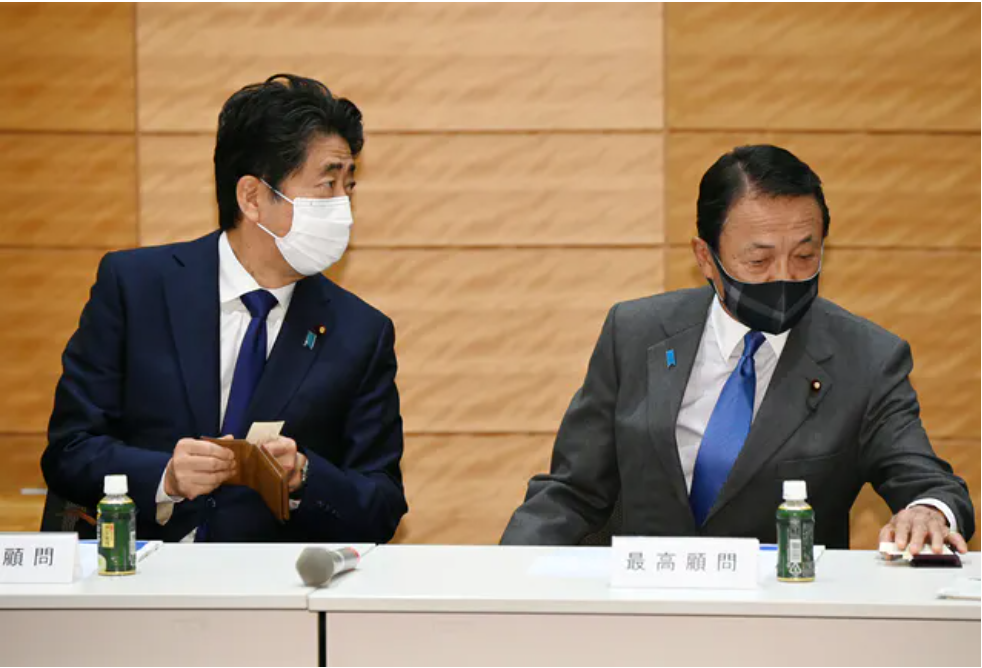 Former Prime Minister Abe Shinzo (left) and Deputy Prime Minister and Finance Minister Aso Taro during a meeting of the Liberal Democratic Party’s parliamentary group on the promotion of semiconductor strategy in Tokyo’s Nagatacho district on May 28.

On May 11, four days after Prime Minister Suga Yoshihide (72) announced the extension of the state of emergency for Tokyo and other prefectures, Deputy Prime Minister and Finance Minister Aso Taro (80) met tete-a-tete with Suga for 25 minutes at the Prime Minister’s Office [Kantei].

After the meeting, Aso told members of his inner circle, “He looked determined” and said he felt Suga’s resolve to promote vaccination against the new coronavirus.

Aso sees his days as prime minister in Suga, who is struggling to deal with the COVID-19, as he knows that a prime minister can’t do everything as he pleases even though he is the person at the pinnacle of authority.

Aso assumed the premiership on Sept. 24, 2008, nine days after the collapse of Lehman Brothers in the U.S. He wanted to force through the dissolution of the Lower House and a general election and to pull the country out of deflation by proactively taking economic measures while he enjoyed a high approval rating right after taking office. But all these strategies fell through.

While he was busy dealing with the aftermath of the collapse of Lehman Brothers, his party, the Liberal Democratic Party (LDP), suffered a crushing defeat in the 2009 Lower House election and power shifted to the then-Democratic Party of Japan (DPJ). But Aso takes pride in having prioritized the prevention of a recession over politics. He naturally felt a connection to Suga, who gives priority to anti-COVID-19 measures.

When former Prime Minister Abe was at the helm of the government, there was a rumor that Aso and Suga were on bad terms. Some in the Nagatacho political district are trying to discern how serious Aso is about supporting Suga. But Aso spares no effort to cooperate with Suga.

In the first half of April, Aso gave Suga, who was scheduled to meet with U.S. President Joe Biden (78), a long note of advice for visiting the U.S., saying: “I’ve summarized my thoughts. I hope this will be helpful.”

In the note, Aso pointed out that the Taiwan issue is particularly critical to Japan’s security policy and underscored that sharing recognition of a potential Taiwan contingency is the highest priority in the upcoming summit meeting. Eventually, the Japanese and American leaders mentioned Taiwan in a joint statement for the first time in 52 years.

The current concern of Aso, who has turned 80, is the international situation of China. In an era of conflict between the U.S. and China, Japan will be forced to stand at the frontline of their confrontation.

When Aso was asked by a member of his intraparty faction why he supports Suga, he touched on his grandfather [former Prime Minister] Yoshida Shigeru, and said: “If [Suga] were to make a mistake in guiding the country, my grandfather would tell me: ‘You were there with Suga. What were you doing?’ when I see him in the afterworld.”

Aso informed Shinzo Abe (66), his sworn friend, of the advice he had given to Suga so that the former prime minister would be aware of his concern about the Taiwan issue.

When Aso said, “Japan cannot make a mistake in making policy for the next five to ten years,” Abe, who is more than 12 years younger than Aso, replied jokingly, “So you need to live long.”

Recently, Aso and Abe are seen working together.

On May 21, the LDP held an inaugural meeting of the parliamentary group on the promotion of semiconductor strategy at its headquarters. Abe and Aso sat next to Amari Akira (71), who chairs the group.

Aso drew laughter from the meeting participants when he said during a speech, “When the three of us gather, it gives the impression of ‘political strife.’ But your expectations will fall short.” But few lawmakers there took it as a joke.

Also, the fact that the parliamentary group has only a small number of lawmakers who belong to the faction led by Secretary-General Nikai Toshihiro (82) spurred speculation. The group created the post of acting chairperson and appointed Hayashi Motoo (74), Nikai’s close aide, to the post.

Nikai also established a new caucus for promoting a “free and open Indo-Pacific (FOIP)” on June 15 and invited Abe to serve as a chief advisor. The promotion of FOIP was the centerpiece of Abe diplomacy. It is believed that Nikai wanted to avoid getting into a confrontation with Abe, who is a member of the mainstream force within the LDP.

The total membership of the largest Hosoda faction, which is effectively led by Abe, and the second-largest Aso faction is 149, which accounts for about 40% of the LDP lawmakers. The two factions can remain influential as long as they keep in step.

Currently, Aso and Abe are keeping a close eye on the revamp of the leadership team, including the new secretary-general, which is expected to take place after the Lower House election.

A person close to Abe says there is a reason why Minister in charge of Administrative Reform Kono Taro (58) and Environment Minister Koizumi Shinjiro (40), who are popular post-Suga candidates in opinion polls, were not included in the candidates list. The person says, “The four senior lawmakers may not be post-Suga candidates but Abe’s choice of candidates for the next secretary-general.”