As Kyodai’s signboards vanish, so does its tradition of dissent and liberty

Kyoto University (Kyodai) is renowned for luring the nation’s best and brightest. As the second oldest college in Japan after the University of Tokyo, it has long been known as a bastion of scientific thinking. 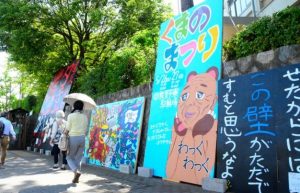 Up until a few years ago, the Kyodai campus was plastered with eye-catching signs for events and club activities. At first glance, some of these signs seemed incongruous with a leading institution of higher education because of the comical images and nonsensical messages scrawled on them. Still, these signs were in keeping with the school’s tradition of honoring liberty, dissent, and progressiveness. The removal of such signboards, known as tatekanban (standing message boards), or tatekan for short, triggered a legal battle this year, pitting a union of Kyodai lecturers against the university administrators (Asahi – 4/29; Yomiuri – 5/1; Mainichi – 6/6). At issue was whether the removal of tatekan violated the constitutional right to free speech.

The Kyoto municipal government passed an ordinance regulating outdoor advertising to preserve the ancient capital’s “beautiful scenery.” The ordinance required a permit to put up billboards on walls facing public roads. In response to the ordinance and complaints from neighborhood residents, Kyodai established the guidelines for tatekan in 2017. These stipulate that only officially recognized groups can erect a tatekan in designated locations, it be no larger than 200 x 200 cm, and it be for the sole purpose of advertising a club or event. 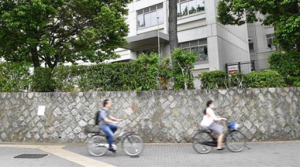 In May 2018, the college began removing signboards that violated the rules. These included tatekan put up by lecturers. In April this year, the instructors’ union filed suit in a local court demanding the city government and college administration pay 5 million yen in damages for infringement of free speech and members’ basic labor rights since tatekan are an indispensable tool for conducting union activities.

While the litigation was filed by lecturers, tatekan have traditionally been produced primarily by students not only to promote clubs and events but also to express their opinions on the political, social, and campus issues of the day, such as the U.S.-Japan Security Treaty, economic disparity, and hikes in college tuition. Tatekan have been “a potent tool for students’ self-expression, political or otherwise,” in the words of William Andrews, a Tokyo-based writer familiar with Japan’s political subculture. He wrote in his blog “Throw Out Your Books” that tatekan were once a common sight at university campuses nationwide and a symbol of student activism, but their usage has drastically diminished and become less political in nature since the 2000s as the government and college authorities have “cleansed” campuses of signboards, as well as political groups, in the belief that they disrupt academic order.

Kyodai President Minato Nagahiro stresses that the removal of tatekan does not violate the Constitution’s free speech clause, arguing that young people today have other viable communication tools, such as social media, and that signboards can be erected if they meet certain conditions. A Kyodai graduate of 1973, Minato dismisses the proponents’ view that tatekan are a core element of school culture, claiming that their virtues, which he admits existed in the 1960s and 70s, lost any relevance a long time ago. 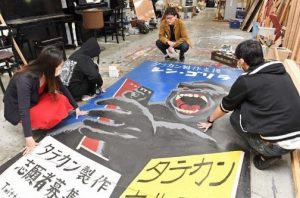 Professor Saito Kohei of Osaka City University (OCU) holds a different view, emphasizing that the legal dispute involves more than sentimentality over a beloved college culture. The up-and-coming sociologist notes that Kyodai’s signboards are original and inspirational, perhaps reflecting the institution’s long history of cherishing academic independence and defiance of authority since its foundation in 1897. The academic explains that OCU’s tatekan culture “vanished” almost 20 years ago following the enforcement of similar rules.

Saito recently visited Kyodai to meet with a handful of students determined to continue producing tatekan in the face of the strict regulations. “We are alarmed by the erosion of freedom on campus,” said a member of the student group Shin Gorilla. “We make tatekan to express our opinions without restraint.” Another student stresses the need to defy the ban, saying erecting signboards in restricted areas is just as meaningful as the UK-based street artist Banksy stenciling provocative images on Israel’s highly controversial barrier in the West Bank. The members also underscored that tatekan production is a “collaborative effort” that requires close communication among participants. Because of the intense exchange of ideas that designing and creating the messages involves, the finished product is often markedly different from the initial sketch, they say, with Saito adding: “Tatekan is an instrument for emerging minds to come up with unique ideas that might not have dawned on them without input from others.” 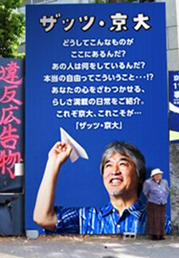 Most students, however, are largely indifferent to what tatekan advocates view as an existential crisis of the core Kyodai spirit. Since the regulations were imposed in 2017, only the current seniors have firsthand knowledge of tatekan culture. As institutional memory of tatekan fades, OIU’s Saito thinks younger Kyodai students might share the school authorities’ view that tatekan are not an “asset” but a “liability” that muddies the school’s rich history and culture. “For past Kyodai freshmen, the randomly erected signboards served as a ‘vivid reminder’ of the pleasure of thinking outside the box, because when they were in high school, their main task was to solve questions that had correct answers and did not require original approaches,” the academic speculates. “The sensational tatekan on college campuses taught them the importance of liberating their minds.” As future Kyodai students may not have the opportunity to see the thought-provoking tatekan, the professor warns that the university may soon cease to be the stereotype-free zone that that has made it an exception amid Japan’s rigid college hierarchy.