Editorial: 76 years after war, Okinawa continues to be trampled upon 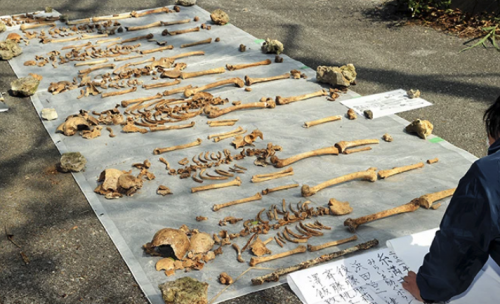 The remains of eight people, including two believed to be children, discovered in a cave in Itoman, Okinawa Prefecture, are shown in March. (Asahi Shimbun file photo)

Okinawa Memorial Day, observed on June 23, is a day for mourning the victims of the savage ground warfare in the final months of World War II and praying for permanent peace.

One in four Okinawans perished in the Battle of Okinawa, which has left deep scars in the hearts of survivors and fortified their resolve never to go to war again.

But their feelings are being trampled upon by policies formulated in Tokyo.

In a plan submitted to Okinawa prefectural authorities last year, the central government, which stands firmly by its project to reclaim the sea for a new U.S. base, added the southern part of Okinawa’s main island as a site where soil and sand are excavated for the project.

Okinawans have been outraged and protests are continuing.

The central government, which initially planned to procure soil and sand mainly outside Okinawa Prefecture, said the discovery of soft ground in the sea off Nago’s Henoko district led Tokyo to review its plans and seek an additional excavation site.

The southern part of Okinawa’s main island was the bloodiest battleground, where the remains of nearly 3,000 victims are believed to be still buried.

We are stunned and appalled by Tokyo’s insensitivity to excavating such a site for the construction of a U.S. base, the very project Okinawans have vehemently opposed time and again.

It was only natural that the Okinawa prefectural assembly unanimously adopted a statement in April denouncing the use of soil and sand containing the remains of war dead as “unconscionable on humanitarian grounds.”

Central government officials did acknowledge that the issue is of extreme gravity. But if they were aware of Okinawa’s tragic past at all, they would have never come up with such a plan in the first place.

Takamatsu Gushiken, 67, who continues to collect the remains of Okinawa’s war dead as a volunteer, said a woman in her 80s, who had yet to receive her older brother’s remains, told him, “The place where I was told he died is where I mourn him.”

We are sure many Okinawans share the woman’s sentiment.

Okinawa’s reconstruction is said to have begun with the collection of the remains of its war dead. Survivors have treated all the remains with respect, including those of unidentified victims.

Remains discovered two years ago have been identified by DNA analysis and other procedures, and were returned to the victim’s bereaved family in Hokkaido this spring.

The central government’s disregard for history has become blatant in recent years.

The repeated manifestation of such an attitude has deepened the gap between Tokyo and Okinawa, and the excavation issue is only one example.

Six years ago, then-Okinawa Governor Takeshi Onaga (1950-2018) said the root cause of the Henoko issue lay in the forcible confiscation of land by the U.S. military and the construction of U.S. Marine Corps Air Station Futenma in Ginowan, Okinawa Prefecture.

He accused the central government of political degeneracy for proceeding with the project to relocate Futenma’s functions to a new base within the prefecture.

But then-Chief Cabinet Secretary Yoshihide Suga deflected Onaga’s argument with a simplistic generalization: “All over Japan, everyone struggled and worked hard to build a peaceful nation.”

Suga declined to face the fact that Okinawa has been forced to bear an excessive burden because many U.S. military installations on Japan’s mainland were relocated to Okinawa, which was under U.S. occupation, following popular protests.

Today, only about 30 people are attending the Okinawa Memorial Day ceremony because of the novel coronavirus pandemic.

We remember and share the grief and pain suffered over the past 76 years by an incomparably larger number of people.