Ambassador to Indonesia disseminates information about Japan on Instagram 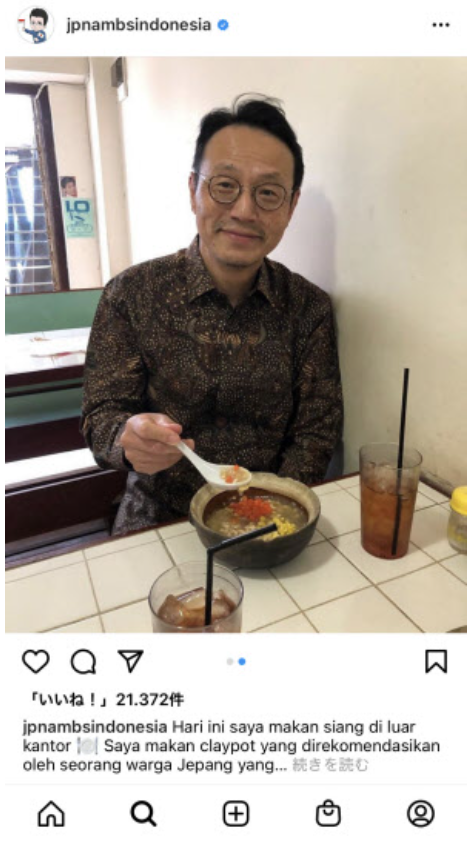 JAKARTA – On June 14, Japanese Ambassador to Indonesia Kanasugi Kenji, 61, visited the headquarters of emerging financial conglomerate MNC Group in the Indonesian capital of Jakarta. The group owns four TV stations and is the largest media outlet in Indonesia. Kanasugi took part in interviews to be posted on two portal sites affiliated with the group.

He spoke about the Tokyo Olympics and Paralympics, diplomacy and security cooperation between Japan and Indonesia, and local cuisine. The interviews were distributed later that day. The two sites have significant reach, as they ranked first and sixth in terms of the number of users in Indonesia in 2020.

Since assuming the ambassadorship in January, Kanasugi has been focusing on online outreach. He actively uses the Instagram account of the Japanese Embassy in Indonesia to strengthen the bilateral ties. He also frequently posts photos showing him enjoying local cuisine.

Other foreign embassies in Indonesia have their own accounts on social networking sites (SNS), but it is unusual for ambassadors themselves to appear in videos and photos to gain publicity. In fact, however, Kanasugi’s distribution of information is a reflection of Japan’s sense of crisis.

In April, a statistical result sent shockwaves through the Japanese business community in Indonesia. It showed that Japan had fallen to seventh place in the ranking of countries with the largest foreign direct investment in Indonesia in the January-March quarter of 2021, lagging far behind China and South Korea. It is growing increasingly clear that the two countries are expanding their investment in Indonesia, while Japan is on a downward path.

Japan is no longer the country with the strongest economic ties with Indonesia. China asserts its presence in the spheres of trade and investment and South Korea has recently been closing in on China. Chinese and South Korean companies are also involved in Indonesia’s ongoing national project of domestically producing electric vehicle (EV) batteries.

Kanasugi says [Indonesian] government officials often ask him sarcastically, “Where has Japan gone?” since his arrival in Indonesia. He views active distribution of information online as a vital tool for raising Japan’s profile among the Indonesian people once again.

Kanasugi pays close attention to the reactions of Indonesians. The average amount of time they spend on the Internet per day exceeds the global average by more than one hour. Indonesian President Joko Widodo has 40 million Instagram followers, more than double the number of U.S. President Joe Biden. In politics, too, the number of “likes” is important.

When Indonesia confirmed the first case of the new coronavirus in March 2020, it was widely suspected that a Japanese national was the source of infection. When then Ambassador Ishii Masafumi conveyed his concern to relevant [Indonesian] ministers, the dust settled quickly. It is believed that the number of “likes” on his Instagram posts gave the ambassador’s words more weight. (Abridged)