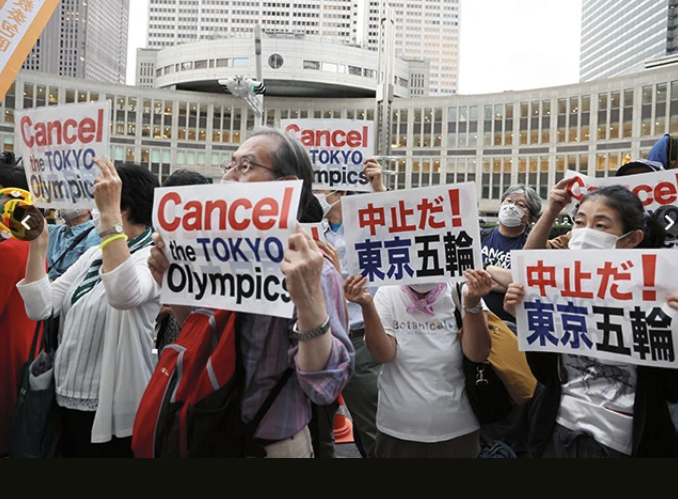 Protesters demand the cancellation of the Tokyo Olympics in front of the Tokyo metropolitan government building in the capital’s Shinjuku Ward on June 23. (Tsubasa Setoguchi)

With just a month left to protest, around 100 people rallied in Tokyo to demand the cancellation of the Summer Olympics, a turnout that pales in comparison to opposition to the event expressed online.

The demonstration was held in front of the Tokyo metropolitan government building in Shinjuku Ward on the evening of June 23, when the number of new infections of the novel coronavirus continued to resurge in the capital.

Wearing masks and holding signs with anti-Olympic slogans in Japanese and English, the protesters chanted, “End the Olympic Games that destroy people’s lives.”

Another said, “Use funds set aside for the Olympics on measures to contain the coronavirus.”

The demonstration was organized by civic groups that have long opposed the Tokyo Olympic and Paralympic Games.

One of the organizers said similar rallies were scheduled to be held in South Korea, Paris and Los Angeles.

Another rally held nearby supported the holding of the Tokyo Olympics.

“If you can gather like this, there will be no problem holding the Summer Games,” one of the supporters said.

The Tokyo Olympics are scheduled to open on July 23, despite continuing health concerns about the novel coronavirus and opinion polls indicating a majority of the public wants the event postponed again or canceled.

An analysis of social media data by The Asahi Shimbun using Brandwatch showed that the number of tweets and retweets with hashtags opposing the Tokyo Games, including “#This is no time to stage the Olympics,” stood at more than 97,000 between Jan. 1 and 11 a.m. on June 23.

The spread of such tweets surged in the middle of this month, including more than 51,000 on June 20 alone.

Mitsuko Uenishi, a professor of labor issues at Hosei University in Tokyo who advocates close scrutiny of Diet discussions, has posted eight comments on Twitter about the Olympics.

In a June 21 tweet, she urged the public not to view the holding of the Tokyo Games as a “done deal.”

“In mountain climbing, you must not rush to the summit, even if it is so close, once you sense danger,” she said. “There are myriad problems in holding the Olympics.

Japan’s preparedness is inadequate in receiving athletes and officials from overseas and in dealing with the coronavirus. The government makes light of experts’ opinions. The problems are so obvious that I will never remain silent.”

Her tweet was read by an estimated 234,000 internet users, according to the Brandwatch analysis.