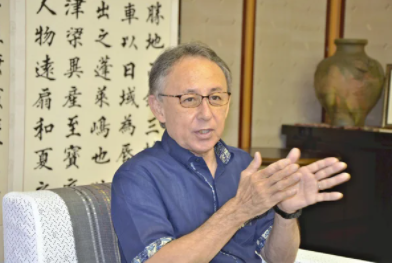 [Below is the Yomiuri Shimbun’s interview with Okinawa Prefecture Governor Tamaki Denny.]

Governor Tamaki Denny: My campaign pledge for the gubernatorial election remains unchanged. We will not allow a new base to be built at Henoko. It is technically and financially difficult to build a new base in Henoko. Without being bound by the current plan of the government that insists Henoko is the only viable option, we will call on the government to engage in dialogue with us, and we will request that the Futenma base be relocated to somewhere outside Okinawa Prefecture or outside Japan.

After soft ground was found at the planned landfill site, the Okinawa Defense Bureau of the Ministry of Defense applied to the Okinawa Prefectural Government for approval to change the design. The prefectural government has asked the ministry three times about the stability of the ground and seawall, as well as the impact of the relocation on the environment. We received responses from the ministry. We are currently questioning the Defense Bureau for the fourth time. In this way, we are examining the matter rigorously.

Yomiuri: The Hatoyama administration of the now-defunct Democratic Party of Japan also tried to relocate the Futenma base outside the prefecture but gave up. Does the prefecture have a concrete plan for a relocation site other than Henoko?

Gov. Tamaki: The Japanese and U.S. governments should discuss the relocation of U.S. troops stationed in the prefecture.

Yomiuri: Fifty years have passed since the signing of the Okinawa Reversion Agreement. How do you view the current situation of U.S. military bases?

Gov. Tamaki: The reversion of Okinawa to Japan was a long-cherished dream for the people of the prefecture, who had endured many hardships under U.S. military rule.

The reversion agreement, however, allows the U.S. to continue to use U.S. military facilities in Okinawa. As a result, 70.3% of all U.S. military facilities in Japan are still concentrated in our prefecture, which accounts for only 0.6% of Japan’s land area. This is abnormal. The current situation is far from the ideal of a “peaceful island without bases,” which many Okinawans envisioned before the reversion.

Incidents, accidents, noise pollution, and environmental damage involving the U.S. military keep happening. At present, the U.S. military bases are located in the south-central part of the main island of Okinawa. This is also the area where the population is concentrated. It is my understanding that those bases are hindering the prefecture’s economic development.

On the other hand, Okinawans in general have fostered a new culture by adopting American culture. Not all Okinawans necessarily keep U.S. military personnel at arm’s length. Okinawans hope that the government will seek ways to find a way to resolve issues surrounding the operation of the U.S. military and the current state of affairs.

Yomiuri: China is increasing its hegemonic activities, and having U.S. forces in Okinawa is of greater importance than ever.

Gov. Tamaki: We understand that the Japan-U.S. alliance has contributed to the peace and stability of Japan and East Asia. We also fully understand that the security environment in the Asia-Pacific region has become increasingly severe in recent years.

I have, however, serious concerns that, in the event of a contingency between the U.S. and China, Okinawa would be a priority target for attack due to the high concentration of the U.S. military bases here. I hope that the government will make diplomatic efforts to ease tensions between the U.S. and China. I also want the government to seek ways to establish true security, something that only Japan can achieve.

Yomiuri: The conservative wing of the “All Okinawa” political movement, which is your (Governor Tamaki’s) support base, has left the movement. The conservative-liberal alliance may already be crumbling.

Gov. Tamaki: Although some companies and others have distanced themselves from All Okinawa, I still feel that there are many conservative people who support me behind the scenes. The independents who participate in All Okinawa are not influenced by the political ideology of conservatives or liberals.

Yomiuri: The Act on Special Measures for the Promotion and Development of Okinawa will expire this fiscal year. Will you seek an extension of the act?

Gov. Tamaki: Based on the act, we receive subsidies for public works projects and lump-sum grants, whose use is left up to our discretion. This multilayered system turns the geographical disadvantages of the prefecture into advantages. I want to request the government to continue and expand the program.

In the next Okinawa Promotion Plan starting next fiscal year, I want to incorporate the philosophy of the Sustainable Development Goals (SDGs) and create an environmentally friendly system for tourism, which is Okinawa’s core industry, so that Okinawa will become a sustainable tourist destination that attracts people around the world.